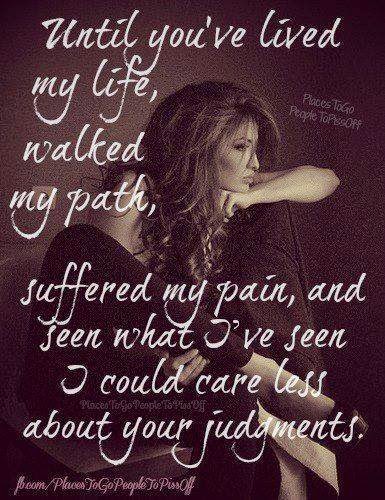 Did you read that sign above?
I did.
And I don't agree. It sounds nice and got a lot of "likes" on Facebook, but think about it.
Should you only accept the judgments of those who have walked in your shoes?
Only listen to people who have been through exactly what you have?
Ignore the input of anyone who hasn't suffered the same pain as you?
Is that even possible when we are all unique? Is it wise?
I don't think so.
I think we are so afraid of being "judged" and being "judgmental" that we have lost our ability to admit that sometimes, we need someone else to tell us: "Don't do that!" or "Stop acting like a fool!" or "You're wrong" or there may be times we need to say those words to someone else.
Let me get personal for a minute. Recently, someone I know who loves me talked some sense into me. She judged me and I am glad she did. She looked at what I was doing, questioned my thinking, and said "STOP IT." This required her to "judge" my actions, intentions, and decisions. She did not stand back, reserve judgment and say 'YOU GO GIRL' as I walked right into a potential problem.
Thank God she judged me and spoke up.
She has not lived my life or walked my path. She has lived and walked her own.
We have not suffered the same "pain" over a lifetime and yet, I respect her opinion, accept her advice, and welcome her input because she is insightful, has pure motives, and truly cares about me.
Her advice reminded me of one of my favorite Bob Newhart comedy skits. Watch it here: (It's short and well worth your time.)

To summarize the skit, Newhart plays a psychologist. His patient is a woman with an irrational fear of being buried alive in a box. His advice?
"STOP IT!"
The skit is satirical of course, but it makes a point. Sometimes we need someone to tell us to "Stop it!" We need judgment. It's one of the ways we know someone really loves us--if they see us acting in a way that could be hurtful or dangerous, they tell us to knock it off. If we are misbehaving or out of line they are the ones who say "Stop it!" I am not talking about the kind of judgment that points a finger out of fear, self-righteousness, anger or ignorance. I am talking about judgment that comes out of love and wanting the best for someone. Big difference. I think the wrong kind of judgment has made us skittish of the right kind, and that's a mistake. (Oops! There I go being judgmental.)

I'm thankful for the 'judges' in my life, even the ones who haven't walked a mile in my shoes. I have big feet, so my shoes wouldn't fit them anyway.

Please Don't Play With The Spider 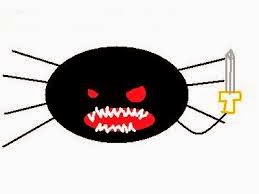 I hate spiders.
Please don't preach to me about how they are such wonderful little creatures; how the planet would be overrun with mosquitoes and flies and world terror organizations were it not for these little eco-friendly eight legged wonders.
I hate them.
I visited my brother in Seattle last week and realized just how much these little creatures give me the heeby-jeebies. Evidently, Seattle is the spider capital of the world. OK, maybe that is not exactly true, but I did see spiders EVERYWHERE. Most were small, but a few were big enough to wear saddles and give rides to small children. My brother was kind enough to walk in front of me wherever we went doing karate arm chops in the air to make sure that I didn't walk into a web. He doesn't like spiders either, but I think he was worried that if I went nose to nose with a big bad wolf spider it would ruin my trip. It totally would have...in a really mellow-dramatic, flailing, cry-baby kind of way. Spiders bring out the terrible two year old in me in a way that is embarrassing, but involuntary. 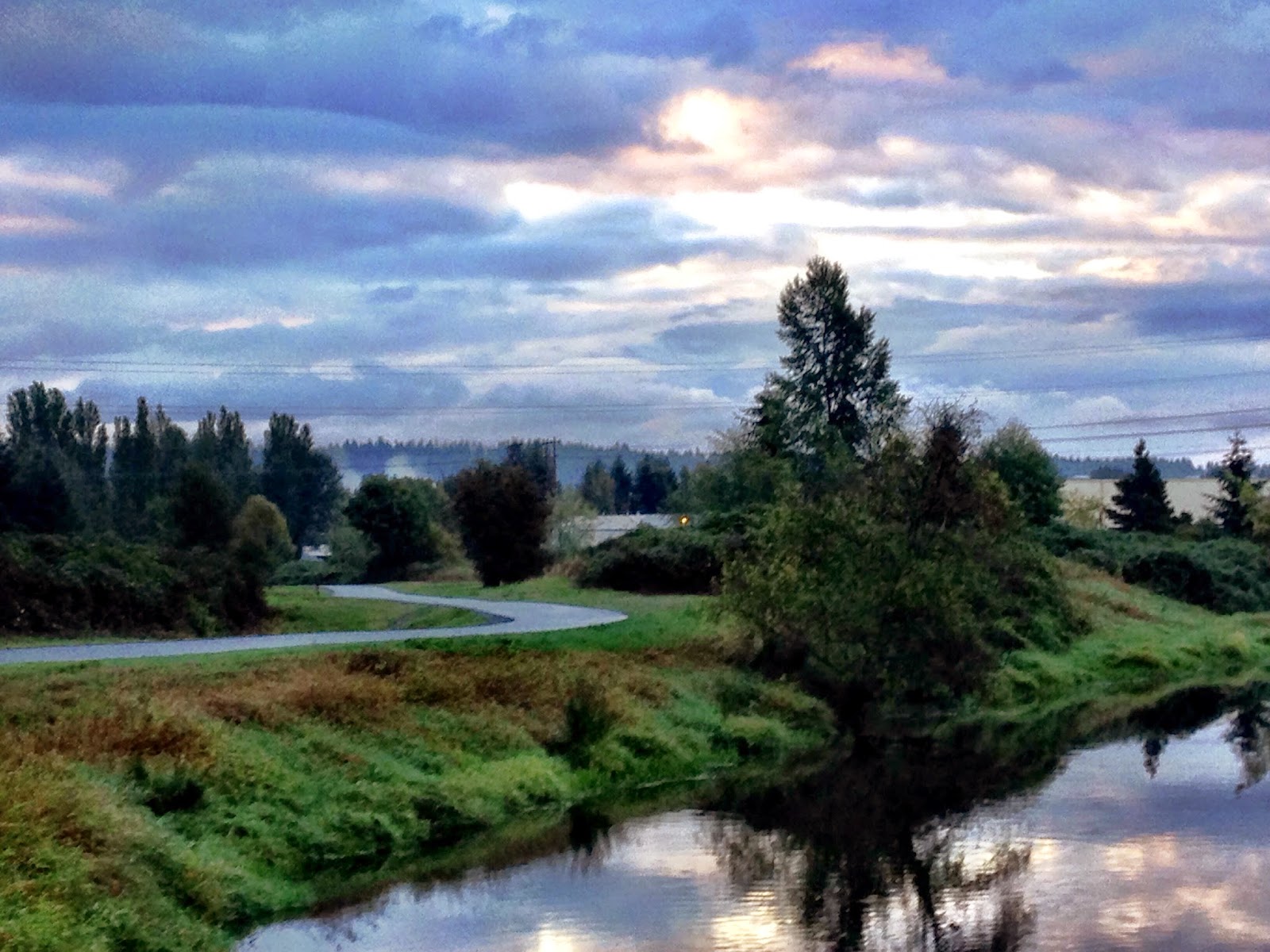 Every morning, my brother and I drove a few miles to a trail along the Summamish river in a town called Bothel for our morning run. (Side note: Did the city founders realize that the town name is just one "r" away from being completely inappropriate?) To get to my brother's SUV, I had to walk along a slope by his house that he called "spider heaven."  I really don't think the words "spider" and "heaven" belong together, but I knew exactly what he meant. The slope happened to be on my side of the SUV (the passenger side) so he would walk me to the door swinging his arms to cut through any webs. I followed behind him giggling nervously, walking Quasimodo style. Once inside the car, I checked myself for spiders in the glow of the interior car light and started breathing again. One morning as we headed to the trail, he told me how he was driving a few days earlier, and a spider had swung down from the visor right in front of him and he had to remain calm and stay on the road even though the sucker was big enough to take the wheel with one leg and change the radio station with another. The hairs on the back of my neck bristled at the thought. If that had been me, I would have been found lying in a muddy rain ditch off the side of the road somewhere mouthing the words, "Get it off me" over and over. Who knows where they would have found the SUV.

Some of you may think I am exaggerating about the spiders of Seattle. Maybe you used to live there or are living there now and say, "What? It's not that bad!" I'm guessing you probably say the same thing about the Seattle weather, so I am going to take your words with a grain of salt. All I know is that I saw spiders everywhere. There was one hanging from my brother's deck. One downstairs in the bedroom. There was one on the back wall. I saw so many in trees and bushes, nestled next to flower pots and under benches that I felt as though I was being watched. Along the driveway leading up to my brother's house there was a big one perched in between two bricks like a beady eyed rock climber. My little niece Anna, who is four, was practicing riding her new bike when she pointed it out to me. "Look Aunt Hope! There is a spider right there!" I was already inside by the time she got to the word "Aunt." Sorry Anna. You're going to have to learn to ride your bike without training wheels on your own.

One day, I went with my brother and his family to a park near their house. It was a gorgeous park - typical Seattle - green expansive lawn, blooming pink rhododendrons hedges, pine trees looming tall, birds chirping, and of course, gray rain clouds overhead with just a bit of blue sky poking out way off in the distance (probably over Oregon somewhere). I was in the playground helping my niece climb a rock wall when a boy ran by with something cupped in his hand. He looked to be about nine years old and was very excited about his new toy. I hoped it was a frog or a butterfly, heck, even a scorpion, but nope, you guessed it--it was spider. THE KID WAS PLAYING WITH A SPIDER!! He ran to the top of the slide with the spider in his closed fist, leaned out over the edge, and opened his hand. The spider dropped out and began to lower itself toward the sand. He used his other hand to pull the web and bring the spider back up. Then he would let the spider drop again, pull it back up, over and over, like a  Yo-yo. I watched in horror from the park bench I had sprinted to at the edge of the playground. Do they not have Legos in Seattle?! Baseballs?? Tonka trucks?!? I watched as he continued playing with the spider big enough to be seen from a distance. I must have looked like I swallowed vinegar and my neck was sweaty despite the cool breeze and overcast skies. Anna was still standing with one hand on the rock wall looking at me with wide eyes. I waved. Sorry Anna.You're going to have to learn how to rock climb on your own. The boy slid down the slide with a closed fist and then ran up to a girl his age near the monkey bars. Even though I couldn't hear what they were saying, I knew how this conversation was going to go.

Little Boy: Hey Brittany! You wanna see what I have in my hand?
Me (from a distance): Don't do it Brittany! Don't do it!!
Brittany: Sure.
She takes a small step back.
Me: Brittany! NO! Trust your instincts! Run away! NOW!!!!
Boy opens hand.
Brittany: EEEEEEEEEEEEKKKKKKKKKKKKKKKKKK!AAAAAAHHHHHHHHHHHH! MOOOOOOOOOOOOOOOMMM!!
As Brittany's scream trailed off into the damp afternoon air, the little boy ran off with a 'gotcha' grin to see who else he could traumatize. I noticed my brother walking across the park in my direction. I ran up to meet him and said, "Did you see that little boy playing with a spider??! A SPIDER!! He was using it like a YoYo?! Oh my gosh!" I crossed my arms and shivered.
He smiled and said, "Yeah, I saw him. He came up to me and I told him to go show his new toy to the woman dressed in all black."
I looked down. I had on black pants, black gloves and my black jacket was zipped all the way up over my maroon T-shirt. I socked my brother in the arm and laughed through my clinched, chattering teeth. We gathered up the kids and walked to the car. To get everyone to the park, we had to take two separate cars, so he couldn't karate chop my route to the car. I had to do it myself. I swung my arms in front me, hoping I wouldn't feel a web. I was close to my car door when I chopped through a web over my head and stopped in my tracks. Had I just cut the line of the biggest spider in the Northwest and now it was falling from the pine trees overhead to drop inside the back collar of my jacket? I was sure of it. I opened the car door and leaped inside.
God, get me back to California. I'll never complain about the ants again. I promise.