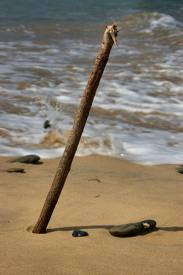 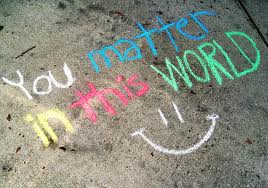 I did that! He will flex his bicep.
I do matter! He will jab his thumb into his chest.
I am alive! He will throw his arms up into the air.

And God will respond:
Yes, you do, my son.
You do matter.
I made you, therefore you matter.
And I have something very important for you to do:
Tell others they matter.
Tell them they are loved.Tell them they don't have to kick over a stick for me to notice them. I made them. I know them. I love them.
Tell them that all that talent, energy, and compulsion to do something that matters is natural. Perfectly natural. In fact, I put it there. Yes, the Creator created creators. I want you to do things that matter. I want you to build, to draw, to paint, to write, to lift, move, grow, run, lead, teach, laugh loudly and love passionately. I put all that desire to matter, to thrive, inside you because you will need it. You will need it as you go out into the world, as you move through it, in order to accomplish what I have put you here to do. You will need it to inspire others. To love others. To lead others to me so they, too, can understand why they are here, why they are alive.
Yes, you are alive. You matter.
Now put the stick back you little brat.