Put Down Your Finger & Back Away from Your Opinion

I come from a very opinionated family. We have opinions about our opinions. We like to "go on the record" or like the people in the old Saturday Night Live skit: "Talk Amongst Ourselves." I could chalk it up to our Irish blood, but that would probably be a cop-out. I mean You can tell an Irishman, but you can't tell him much is really true, but the reason why people in my family bring a bean casserole AND an opinion to get-togethers is more than just heritage. My Dad especially loves to "debate the issues" and discuss what the "moderns" think about the latest hot topics. He likes to hash them out, debate them, throw opinions around and then decide (usually based on the Bible) what is TRUTH.
This week I spent time with him in San Diego. In between the breathtaking views and lunches on the shore, we talked about everything from Post Traumatic Stress Disorder (PTSD) to immigration. That last topic he tried to avoid.
"I really didn't want to bring this one up because I figured..." He said. His voice trailed off at the end with reluctance.
"Because what?" I asked.
"Because I know how you probably feel about this."
"You do?" I asked.
"Well, we can't just open the border and let everyone come in who wants to come in. That is just unsustainable."
"Who said I wanted to do that?" I asked, puzzled.
He was making a big assumption. He knows I work with Latinos. Have for years. He knows some of my closest friends are Latino/as. He knows I speak Spanish, enjoy Tapatio on just about everything and have never met a Mexican dessert I don't like, but how did he know how I felt about immigration? He didn't. He just assumed based on what he knew about me.

"So what's your solution?" he asked after he could see that I was slightly perturbed at being pigeon-holed.

I told him that until the border is secured, illegal immigration will always be with us. I shared what I liked about the Dream Act and Rubio's plan to give people who are already here a chance to become citizens. And I said I think it is heartless to stand out in front of buses full of refugee children and families from Central America shouting that they are not welcome in "our town." No matter how you feel about immigration politically or ideologically, I think it is important to remember this is a human issue.

He nodded. "As a Christian he said, I feel compassion for these people. It's difficult. But reality...reality says that we just can't take in everyone who wants to be here, just open our borders and let them all pour in."

"So reality trumps Christianity?' I asked with a twinge of sarcasm. 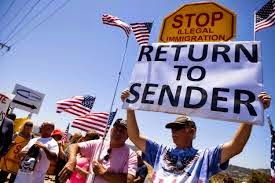 "No, no, I just, I'm not sure if there is a perfect solution for this. This is a very difficult one." His voice trailed off.
Don't get me wrong - my Dad IS very opinionated, but he is a sensitive, good man who tries to do right by God. And this IS a very complicated issue.
Ever notice how PEOPLE complicate things?
If you are distant from the real people involved in the "issue" (like immigration); you don't know anyone the "issue" affects, it is really easy to have an opinion. But as soon as you get to know someone, wow, things get a lot more complicated, don't they?
Opinions come easy when they are about people you know nothing about.
My opinion about immigration is formed by my relationships with people who either were or are illegal immigrants. I care about them. I love them as sisters and brothers in Christ. I work with them. I am friends with them. They matter to me. A LOT. I've heard their immigration stories - the ones they tell of being brought here as a baby, toddler or teenager by parents fleeing drugs, corruption and destitute poverty. I've been to their weddings, graduations, quinciñeras, births and funerals. I've been in their homes and at their churches. I've had carne asada in their backyards and tres leches in their kitchens. (Read the stories of three immigrant teens I interviewed: Crime of Opportunity- Book is free with Amazon Prime or only $2 otherwise.)
I am thankful for my relationships with my Latino/a brothers and sisters because it helps me put down my big white pointy finger of judgment and back away from my opinion and re-consider. It doesn't mean I don't have an opinion or never make judgement calls, it just means I don't throw either around like a political wiffle ball. I realize there are PEOPLE behind this "issue"; there are many lives affected by whether or not immigration reform passes, so I tread carefully. Sensitively. I try to show humility and compassion. Maybe the way I see it isn't the only way? Or the right way? Maybe I should walk a mile (or thousands) in their shoes? Maybe it has become too easy for me to extend my pointer finger and make a broad statement of judgment? It doesn't mean we can't talk things over, disagree or seek solutions (in fact, we should!), but it just means we ought to do so carefully and lovingly. After all, people around us are watching and listening. And when we spout off in an arrogant manner about the issues, especially as Christians, the rest of the world learns about God.

Wow, their God seems really angry.
God doesn't like immigrants.
God must be pro-American.
Guess you have to be a Republican to be a Christian?
Wow, why are Christians so opinionated about everything?!

Like I said, opinions are like belly buttons. We all have them. But it seems like most of us have "outies" when maybe we should take some time to go "innie" and quietly and humbly consider the human and spiritual impacts of the issues before we speak. But of course, that's just my opinion.