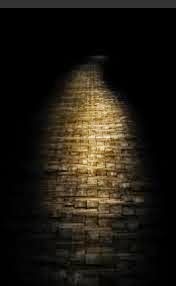 I thought I saw someone out there.
My dog growled long and low and I squinted my eyes to look closer. There was someone standing out there in the dark. Looking down from the window of my second story bedroom, I could see a shimmer on the pathway.
The pathway behind my house was completely dark, except for the light generated by the moon that sat high and large overhead. This pathway--the "paseo" as the locals called it--ran along the dry riverbed from one end of my town-home complex to the other. During the day, it was busy with bikes and power-walkers and the occasional skateboarder. At night, the rabbits and coyotes took it over. The milky shadow out there right now looked like a woman but I couldn't be sure. Whatever this was was standing stiff and straight as a statue. I kept staring. The shimmer turned and now I could see a profile. This was a woman. A long white dress trailed behind her as she took a few slow steps down the pathway. Where was she going? And dressed like that? As if she heard me, she stopped, turned and headed back the other way. Was she lost? I considered going downstairs to my backyard and yelling, "Is something wrong?" but I thought better of it. She could be high. Drunk. Crazy. All of the above. And I couldn't be sure she was alone.

My dog growled loudly and barked once.The woman wheeled around and looked up. I gasped and stepped sideways behind my curtains and out of view. I let a few seconds pass and then slowly peeked out again. She was gone.

What was that all about? I pressed my face against the screen to see if she had walked out of view. After a few minutes, I shrugged and turned out the light and crawled into bed. My dog jumped up after me and curled into a ball at the foot of the bed. I could see the moon out my window--large and bright--almost bright enough to read by, but I wasn't interested in reading. I wanted to clear my head and settle my nerves so I could fall asleep. I tried breathing deeply while laying flat on my back.
Then I heard a knock.
I craned my ear.
Knock. Knock. KNOCK.
Someone was at my front door? At this hour?
My dog barked and jumped up. I slid out from under the covers, grabbed the baseball bat by the side of my bed and went downstairs. New neighbors had just moved in next door last weekend. Maybe they needed something? But at this hour? I made it to the door and looked through the eye hole.
It was her!
I drew my head back and took a deep breath. My dog barked and pushed against me in anticipation of the door opening.My heart sped up. I shifted the baseball bat to my right hand. I peeked back through the eye hole.
"Can I help you?" I said through the closed door.
"Let me in!"  Her voice was weak and gravelly, like a smoker's.
"What?" I asked. I had heard what she said, but didn't know what else to say.
"Let me in!"

I jerked away from the eye-hole and scurried to the window next to the front door, pulled the curtains back slightly and peeked out. She was leaning her forehead against my door.  I watched as she pushed herself back from the door, lifted her head and crumpled down into a sitting position like a rag doll. Her white, lacy dress splayed out all around her. She folded her hands in her lap, turned her eyes upward, and closed them. She looked like she was praying. Or drunk. Maybe both. I swallowed hard. My dog barked nervously, jumped up and scratched my leg. I never moved my eyes off of the woman. Her skin was pale, almost translucent like a moonstone, except for the parts that were covered in dirt--elbows, palms, every part of her that was visible was earthy black, like it hadn't been washed in months. There was a red stain on her cheek. Blood? Lipstick? Marker? I couldn't tell. Her hair was a jumbled, knotted mess of brown and gray. I could tell her disheveled locks had once been weaved into a fancy braid arrangement of some sort because there were a few rope like strands still intertwined at the top of her head. A large, pink ribbon tilted from her head like a grinder monkey's cap.

"Why do you want to come in?" I asked through the window. My voice was loud and firm. She looked up sharply at the door and then to the window, catching my eye. Her mascara was smeared to her ears and her cheeks were sunken, gray pockets. She did not respond, instead she struggled to get up--veins bulged in her pale arms as she attempted to push herself up off the ground. I slammed the curtains shut and stepped back. My heart pounded. I heard moans and grunts coming from outside. What was she doing? I opened the curtain.
I lurched backward and almost fell while my dog barked wildly. Her face was pressed against the screen; her arms bobbing at her sides like she was trying to keep her balance. She smiled with half her mouth. "Let me in." She whispered.

I tried to quiet my dog and my heartbeat. Both were jumping wildly.
"Why do you want in?" I asked loudly from behind the curtain. My voice was shaking. Her face was still pressed against my screen, and now her mouth was open like she was screaming but nothing was coming out. I noticed most of her teeth were rotten or missing. Probably meth I thought. I was glad I hadn't opened the door. Her breath wafted in through the window and I took a step back. Up until then, I thought my dog had cornered the market on bad breath.

"Let me in!" Her hoarse voice trailed off to a cough.
I heard my dog barking only this time I realized she wasn't next to me; she was back upstairs. Her bark got louder and more intense like she had someone or something cornered. I ran up the stairs and to my bedroom. My dog was looking out the window barking in a fever pitch. I ran over to her and looked down into the darkness.
Wha--?
The woman was walking along the pathway again in that slow, liquid way, almost as though she were floating, her white dress trailing out behind her just like before. I felt a chill crawl up and wrap itself around my neck. How was this possible? Were there two? The woman continued to walk, then she stopped and turned to look out into the riverbed. The white beads of her dress reflected the moon light like small disco balls. My dog let out a deep growl and then went silent. I breathed deeply.

You're seeing things. No one is there. Stop being silly.

My cell phone was downstairs in the kitchen. I had to get it. I ran to the stairs and rushed down. When I got to the bottom step, I could hear whistling coming from outside.
I ran to the front door and looked out.
The woman was sitting cross-legged on my porch again, bu this time her white dress was tucked under her. She had un-braided all of her hair, taken out of all the ribbons and bobby pins, and let it hang down her back and sides like dingy brown-gray twisted ropes. She was whistling loudly. The tune sounded very familiar, but I couldn't place it.
"Go away!" I yelled.
She appeared not to hear me and kept whistling.
"Go away NOW!" I yelled again.
She kept whistling and ran her fingers through her hair. She took one long disheveled strand and held it up toward my porch light. She twisted it and appeared to be fascinated by its length.
"Did you hear me?" I screamed. "Go now or I'm gonna call 911!"
She dropped her hair.
I watched one soot-colored bare foot come out from under her dress and then another. Her toes were black like olives and a few appeared to be missing nails. She stood up slowly, swayed a little bit, and then brushed herself off. She leaned on the wall near the doorbell. Her eyes were shut and her knees buckled a little bit.
Great. She is probably coming down from her high. Perfect! I'll have a meth head crashed out on my porch in a second. That'll make a nice welcome gift for the neighbors.
She staggered to the window next to the door. Her eyes were pleading and soft, but they seemed to grow darker as she stared at me. Her mouth dropped open. I stepped back and raised my voice.
"I told you! Go away! I'm not kidding about calling 911!" My voice was lower than usual, but hoarse.
I ran to get my cell phone. I held it up in the window so she could see it. She leaned and swayed, but didn't look. I took a deep breath and tried to take the emotion out of my voice and sound serious. Ominous. "You have one minute to get out of here or I am going to call the police."
She didn't move. She kept leaning against the wall, balancing herself with her head.
I dialed.
"Hello, 911 what is your emergency?" The operator sounded busy.
"Yeah, uh, I have someone at my front door who won't leave."
"Have you asked this person to leave, ma'am?"
"Yes. Many times. She is just sitting there and won't listen to me. I have told her to leave and she won't. She keeps asking to come in."
"Do you know this person?"
"No, no, I do not. She wants to come in, but I won't let her. Can you please just send the police?"
"Ma'am, can you confirm your address?"
"23908 Elfman Drive."
"Is that in River Village?"
"Yes."
"Wow." There was a long pause on the other end of the line.
"What?" I asked impatiently.
"We've gotten a lot of calls from your neighborhood tonight."
"Really?"
"Does this person at your door happen to be a skinny woman in a wedding dress?"
I swallowed hard. "Uh, yeah, that's right."
"Well, then, ma'am it's fine. Just let her in."
I switched the phone to my other ear. Was I hearing correctly?
"What do you mean just let her in? I want her to leave! Did you hear me? Something is not right with her. I need the police!" I looked out the window. The woman was re-braiding two big chunks of her hair. Her head bobbed up and down like at any moment it would snap off and roll away.
"Ma'am, there is no need..."
"What do you mean there is no need? She's trespassing! She's harassing me!  For all I know she is high on something or drunk!"
"Ma'am, she's been trying to find your party. Just let her in and she'll be fine. She's harmless."
"What party? I'm not having a party! What are you talking about?" My voice was getting louder and starting to break.
The operator continued, "It's your turn to the throw the party tonight, is it not?" Her voice sounded serious.
I opened my mouth to answer but she continued: "You know the party where you leave your body and soul at the door?" With that, she laughed loudly--a hearty, throw your head-back laugh. It was so loud I pulled the phone away from my ear. That's when I heard the whistling. It was coming from the woman outside. The same song as before.
All dressed up with no where to go...
My mouth went dry. I dropped the phone.
This time I knew the song. 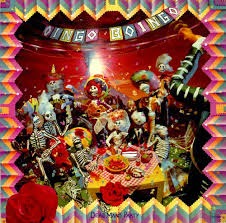