A bunch of your friends showed up at your memorial to say goodbye to you today. I brought fruit salad, tablecloths and plastic cutlery and a box of tissues. When the time came, I got up on the mic and told them how we met and how when I showed up at your place for the first time, I had mace. You were the guy who answered my ad on Craigslist almost ten years ago--the ad where I said I needed a music producer. I didn't know you from Adam so I had to come prepared to take you down if you were a perv or a creep. When I knocked on your door, I had one hand on my mace and one was gripping my guitar case. When you answered it, I had to raise my head to look you in the eyes; you were so tall. Your black hair was long and greasy and pulled back into a pony tail. You had on a black T-shirt and army style shorts, both were wrinkly, but you were undeniably cute. You looked high, but friendly. You ushered me in to your apartment with a smile and I put down my guitar case on the hardwood floors in your living room and kept one hand in my pocket on my mace.
Your dog, a big puffy black and white mix of a mutt, was outside, confined to the porch. I could see him through the sliding glass door. This is where he would spend most of his time when I was around because you didn't want him to bite me. He was "broken" you said. He had another side to him and for no reason he could snap.

You seemed nervous as you showed me the recording studio which was in your bedroom. I felt awkward going in there with you, like I was going to be on the 11pm news for all the wrong reasons, but I immediately saw you were legit--you had microphones, a mac and a bunch of guitars, amps and cords. The room was cramped and I didn't know where to put my guitar until you pointed to the bed. I put down my guitar case, popped it open and pulled out my notes. I had twenty years worth of songs just bursting to come out. We talked about what I was trying to accomplish, what I needed and we agreed to a price and to start meeting once a week. Usually, I would come over on my Fridays off and we would work on one part of a song. We would "lay down" rough guitars, or vocals, harmonies, bass or percussion. You could play it all with ease and I could fake it. During the week, I would send you MIDI files to add into the song we were working on and you would try to make them sound less "processed." Every week, when I would show up, you would drink multiple cups of coffee while we would chit-chat on your couch, and then you would confine your dog, fill up your coffee cup again, and we would head into your bedroom where you would hook up all the mics, cue me when to start and record everything on your Mac. I remember you just clicked and 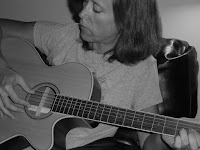 pointed and dragged, and dropped and magic happened. You told me to "sing angrier" to "play softer" or to "listen to the metronome." We would do numerous takes, sometimes singing together. One song would have rows and rows of recordings on your computer and you would layer them all as I would share how I wanted the song to sound or feel. I wanted more reverb on my vocals. You wanted to re-do your guitars because you didn't like one little part. We used blankets to dampen echoes, we recorded live birds outside your windows, duct taped mics, and searched for just the right sound. It was a long process, but thrilling. You were very patient through all my songs, although I could tell you did not enjoy recording "One White Rose." I admit, it is a sappy little country dittie--a real love story in a song--and you pretty much gagged over it, but kept your professionalism and made that song come to life. You did that for all the others, too. I remember telling you that I wanted the acoustic guitar in the song "Stay" to sound like the toy that hangs over a baby's crib. You know the one with all the little dangling animals that spins around to keep baby occupied? It usually has a soft plucking song that is played intentionally slow and with a soothing touch. You nailed it.  I told you that I wanted a guitar riff right after the line "I bet you take me to be lonely" in the song "Life Through Omission" that sounded like someone laughing and you nailed that, too. We joked about layering my vocals in "Nobody's Home" to the point that I sounded like the Forester Sisters. We laughed over the piano solo in "Devil's Hand" singing "Rain is falling, rain is falling" along to it. Every week for four years, I was at your house every week hours. In between all the recording, coffee drinking and dog corraling, we became close friends. We went to lunch, helped each other with online dating, babysat each other's pets (I managed to stay unbitten), went on hikes, even jumped out of plane together. I critiqued your art, did your resume and helped you get a job as a graphic artist where I worked. You helped me learn how to sing into a mic, how to properly tune a guitar, and how to use a Mac to record. We loved dogs, Iron Maiden, old records, concert T-shirts and running. I went to Pasadena to watch a
screening for a movie you scored and I watched you play with your band in converted living rooms, parks and clubs.You helped me get coffee shop gigs and we played together at the Paseo Club. You told me I "didn't suck" and I told you that you were the most talented person I knew. We shared stories about our nephews, living in the San Fernando Valley, and growing up in religious families. I bought you a mandolin, you re-strung my guitars for free. I brought you Led Zeppelin memorabilia and you took me to Chinese food. We met through music, but we discovered we had a lot in common besides music. We both had a dark side. A sad side. Most people would comment about how "sad" or "depressing" my music was saying, "But you're such a happy person!" I would explain that is WHY I am so happy; I get my sadness out in my music. If something bothers me or someone hurts me, you'll find it in my music I said. You understood. While you didn't write many lyrics, I could hear your anger, pain and longing in your guitar riffs. You asked me once to listen to your music and tell me what I heard in it. "What is happening in the movie when you hear this song?" You asked. You always wanted to write music for movies or TV. I told you I heard a woman running from someone who was chasing her or a son walking across a field toward his father after years of being away and wanting to reconcile. You just nodded. Other songs would start soft and melodic--with the beautiful sweetness of you and then all of a sudden, like a cloud passing in front of the sun, a dark, heavy guitar riff would drown out the tenderness and take over. I told you I could hear you in your music. I heard you today, Andy, at your memorial at that park just up the street from your house. One of your band mates played the last song you ever recorded, and it was hauntingly beautiful. As your guitar rang out through the speakers, a breeze picked up and I just sat with my eyes closed, crying, hearing sadness in every note, remembering all the times we would just "riff" songs in your apartment. I remembered that's exactly how the song "Fool" came to be. You had so much creativity in you--too much to be contained. Too much for one person. I was glad I had brought a box of tissues as your friends got up to share how they met you, how they cared for you and how they missed you.

Only you know exactly what caused you to turn your back on everyone and everything and say "Enough is enough." I do know you had severe depression. As we got closer over the years you shared with me some of the burdens you carried and I believe depression was your closest companion. It wasn't a good friend to you. I hope I was. I won't share all your burdens, but I want you to know that no matter what you heard inside your head Andy, God loves you.
But I know you know that now.

I miss you my friend. We should have gone to the park today to hear you play. Instead we said goodbye. I know I will be saying goodbye to you for a long time--every time I listen to my music, every time I look at our pictures, see your artwork, and hear your songs. You will live on in music--in every note, I hear you.

Why are you out there? So far away.
Where the sun drops like ripe fruit at the end of the day.
If only those years, I had a chance to replay
I'd tell you
I'd tell you
Stay.

Videos from the good ol' days:
Hope & Andy Live a@ The Paseo Club
Making "Unsteady As You Go"