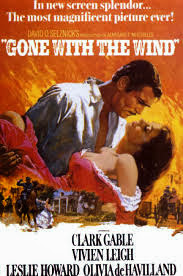 OK, don't get me wrong.  From a cinematic perspective the movie is amazing when you consider that it was filmed in the 1930's. The set, the long horizon shots, the way they use lighting and pan the camera is groundbreaking.
But I just can't like anyone in the movie.
Especially not Scarlett.
In one word...she is DESPICABLE.  She connives, manipulates, whines, cheats, gloats, pouts, rages and pities herself.  She plays hard to get one minute and pathetically desperate the next.  The whole town hates her, even many of her family members and she is still unrepentant. She is shameless, heartless and directionless. All she wants is a man. All she wants is the man she can't have. All she wants is money. All she wants is money she can't have.
I almost liked Rhett--but he is a "ladies man" as well as abusive and cocky. But there is one thing I like about him --he tells Charlotte who she is and is not afraid to say it in the plainest terms. He calls her a "child" at one point and he is right, except that I would have used the word "brat" or maybe even something harsher, but I have to keep in mind that is was the 1930's so probably "brat" would have been pushing it.
In the end, he grabs his stuff and leaves Scarlett and when she pleads and sobs and begs him to stay, asking, "Oh Rhett, what will I do?" he delivers his famous line: "Frankly, Scarlett, I don't give a damn." Then the movie ends with her staring off into the distance, a nostalgic look in her damp eyes, saying that she is going to go home to her farm "Tara."
Good riddance.  And for God's sake don't follow her there with the cameras.  I am done with Scarlett and Rhett, and this whole technicolor movie.
I know for some, this harsh review might seem sacrilegious. I know how people feel about this movie.  The lady at the front the counter of a store I was in yesterday managed to squeeze in a comment about her favorite movie being "Gone with the Wind" before she bagged my stuff.  It's amazing how much this movie is ingrained into our culture and how it truly is a piece of Americana. I don't know why I hadn't seen it (Baptist censorship?) up until a month ago when I started watching it a little bit at a time. I knew some of the lines even though I hadn't seen the movie, just from people quoting them over the years at opportune times.  But I can honestly say that even though it took me over 40 years to finally sit down and watch that movie (and almost that long to get all the way through it) - I'm NOT glad I watched it and yet I am.  I'm glad I have finally seen this classic and can therefore be considered a "true American" but I am not glad because it was four hours of despicable people doing despicable things (with rare exceptions) and in the end, really nothing gets resolved and you are left with no one to cheer for.
Call me crazy, but I like to cheer others on and I think most Americans are the same. We like movies that remind us there is some good left in society. That there is someone or some THING to cheer for and get behind. That's why we like underdogs and long shots. That's why we like the no name guy who wins an Olympic bronze. We love it when we're down eight races to one and come back to win it all like we did in the America's Cup the other day.  We have books like "The Little Engine That Could" for our kids. We tell our teens to "never give up." As adults, we like when our friends and family check something off their Bucket List. (Usually this involves skydiving from a ridiculous height after the age of 50 and then posting the wind-blown wide smile on Facebook.)

That is where "Gone With the Wind" really let me down. I had no reason to raise my pom-poms. The nice folks (like Ashley's wife) spent ten minutes on screen out of 238 because Scarlett hogged every frame with her jealous tears, angry outbursts and insatiable desires. I don't need every movie to be like Forrest Gump, where you know exactly who to root for (Run Forrest! Run!), but if I am going to spend four hours on a movie, I would at least like there to be one person in it that makes me feel a tad inspired. I'll even settle for an animal to cheer for.
Maybe I'll watch Finding Nemo this weekend.