Your Music is Scaring My Dog 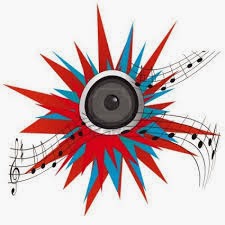 The other day I took my dog out in the car with me to run errands. We pulled up next to a monster truck at a stoplight and I heard a screeching noise next to me. My dog whipped her head out the window to see what the clamor was. We both heard what sounded like zombies singing along with a drum machine. My dog literally cocked her head (think RCA dog), pulled her head back inside and hunkered down in her seat. I couldn't have agreed with her more. The music was scary. Picture the movie World War Z - one of those zombies trying to "sing" its heart out - a guttural, screaming, primal-I'm going-to-eat-your-face type sound all on one note, if you could call it a note. Then picture a frantic, methodical "tic-tic-tic" drumbeat that sounds like someone is holding down the fast-forward button.
Or a simple way to put it:
This guy was blasting "Angry Teen Music" from his over-sized, knobby-tired truck.
And my dog was petrified.
The light changed and we managed to pull away, and I found Jackson Brown on the radio. "Running on Empty" seemed like a lullaby. She settled into the seat next to me to lick herself and all was well.
Later that week, I heard something else that scared me. It didn't scare my dog, but my guess is if she had heard it and understood it, it probably would have.

I heard that at the Church of the Nativity in the Holy Land, a lot of fighting goes on. Inside. The church is shared by three different Christian orders - Armenian Apostolic, Greek Orthodox and Roman Catholics. Each one has a "section" of this holy church. This is supposed to be the church that marks the spot where Jesus was born, but it is also the spot that marks where division thrives. The religious folks are very territorial about their section of the church. If a Greek Orthodox is sweeping his corner of the church and accidentally runs his broom on the Apostolic side, a fight may break out. Broomsticks have been raised and lowered on the heads of rivals. Sometimes, Palestinian police have to break things up. If someone were to walk in in the middle of the brawl, it would look like robed janitors duking it out with cleaning supplies. Funny, when you think about it that way, but also very, very sad.
And scary.
This type of things scares folks away from God. It makes me cringe to call myself a Christian. Truly embarrasses me. Why would I want to be associated with the Christian religion when they can't even get along inside the very church marking the spot where Jesus was born?  And it is not like an Orthodox is sneaking over to spray graffiti on the Catholic side of the church, or a Apostolic holy man is peeing in the Orthodox corner of the church -- nope, they are cleaning it!
Hey!  Keep your broom on your side, buddy!
Don't even THINK about dusting on the other side of this line!
Get your OWN Windex Holy Father!
Yes, even when cleaning up, they must stay in our corners. Even on the very spot where God's Son lay down his wee head in the manger.
Sigh.
How this must break God's heart.
To see this debacle. This despicable act. This division.
And how it scares people away--just like a monster truck with screaming zombies blaring out of it's speakers. The clack of broomsticks as they clash in mid-air, the insults, the hatred, the yelling, the anger--all of the fighting that goes on in this sacred church and in other Christian churches and communities--makes others, non-Christians, want to run, drive, jet-away from Christianity as fast as possible. Can you blame them for burning rubber to get away from the noise as soon as the light turns green? Certainly not.
I struggle not to run myself.
I try to focus on the Christians who were the first ones into the Philippines after the typhoon.  The ones who show up as doctors and nurses and caretakers in foreign countries and here at home to care for the sick, homeless, runaways and single moms. I try to smile when I see the new Pope spending time with the poor, humbling himself enough to downgrade his living quarters. I think of the kind Christians I know who have changed my life for the better, been there when I needed them and shared words of encouragement at just the right time. (You know who you are!!)
But sometimes, it isn't enough to get the shouting zombies out of my head.
I need to look at the One who's birth we celebrated yesterday. The King who comes as a tiny baby and can't even find a decent place to lay his head his first night on earth. The child who grew up to challenge the religious leaders of the day. What did he do when he saw religious hypocrisy?
He threw over tables and grew angry.
He exposed hypocrites for what they were.
He pointed at the "high and mighty" and said, "Don't be like that."
He also lived, loved and reached out to the outcasts and the lost.  He soothed wounded hearts and healed broken bodies.
He didn't scare people away. He allured. Children wanted to sit in his lap (and he didn't have to promise them their favorite gift for Christmas.) "Sinners" wanted to eat with him and he obliged wholeheartedly. Bumbling buddies became devoted disciples. Doubters became faithful even unto death.

Let's not let the screaming religious zombies drown out the soothing music of the "reason for the season."


Hope A. Horner, 2013
www.hopehorner.com
Follow on Twitter:  https://twitter.com/HopeNote
Email author on gmail at hopeh1122
Posted by Hope Horner at 7:23 PM