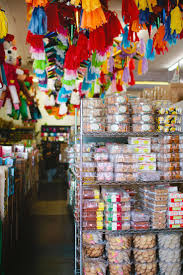 She was writing and didn't see me when I walked in the store. The man's voice coming from the small boom box behind her was pleasant and sounded young. He had only a slight accent.

After each sentence she wrote in a spiral notebook that was open on the counter near the register. I stood there until she lifted her head.
Te puedo ayudar? (May I help you?) She had almond skin, short curly hair and a friendly face.
Si, por favor. Tiene usted cosas para la cocina? (Yes, please. Do you have kitchen items?) I replied. I needed a few things for an upcoming dinner party.

She smiled and nodded for me to come toward her.  I noticed she had a variety of Mexican candies on the counter, including de la Rosa which is my favorite. They're a bit like peanut butter dust so you have to eat them carefully, but they are melt-in-your-mouth delicious. The man's voice behind her continued on.

"I'm learning." She said and tilted her head toward the sound. Her accent was thick.
"That's great! Que bueno." I said. I wasn't sure whether to respond in English or Spanish so I used both.
She hesitated, then pushed her notepad toward me and pointed at what she had written with her pen.
"Is right?"
She had written a few sentences in the notepad. Her letters were large and curly. I noticed she had spelled the word "the" "tha."  I told her to change the "a" to an "e."
"Ay!" she exclaimed and crossed out the "a" and made it into an "e."
She was confusing the English "e" sound with "a." "There" was spelled "thar." "Where" was spelled "Whar."
I pointed these out and she corrected them.
"English es muy dificil." she said.
"Si, muy dificil." I responded. She shook her head. She told me in Spanish about her troubles with English vowels and flipped back a few pages in her notebook to show me where she had crossed out her mistakes and made corrections. I told her English was confusing compared to Spanish. In Spanish, you always know how the vowels are going to sound because they don't change. Not in English. The vowel "e" can be pronounced many different ways.

She said she was taking English classes at the library and used these cassette tapes, which she also found at the library, to practice. She grabbed one and handed it to me. I looked at the label. They were from 1995 and called "English on TV." I hadn't seen a cassette tape in awhile so it made me smile. I remembered all my cassettes from back in the 1980's and how they would inevitably get 'eaten' by my tape players. She said she listened to the tapes here at work because she didn't have any other time to teach herself English. She said she was struggling to learn, but the classes and tapes were helping.

The man's voice behind her moved on to new sentences and she wrote carefully in her notebook, occasionally pointing and asking me if her words were correct. Before too long, she was telling me her story-how she was brought to California from Mexico by her parents when she was 12 years old. She said her family settled in Bakersfield and when her parents sent her to middle school there she was so afraid she cried nearly every day for a year. She eventually dropped out. She moved here, closer to the coast, and opened this small business with her husband. The store sold party goods, snacks and dollar store items. In the window was a piñata of Chilindrina, a character from a famous Mexican TV show. Candles, cheap plastic toys and multi-colored paper plates sat on shelves. She told me that most of her family was still in Bakersfield and she felt it was a real shame that many of them, now in their 50's and 60's like her, no longer spoke Spanish, only English. 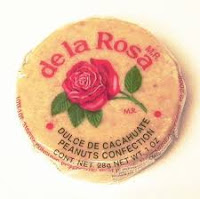 "You need to speak English," She said, "that why I learn, but two languages is better, no?"  I agreed.
I had just gotten back from Europe where nearly everyone spoke at least two languages. My Italian tour guide spoke four, and was learning a fifth.
"Como se llama?" I asked her.
"Anita." She said.
"Mucho gusto Anita."
"Mucho gusto.Y como se llama usted?"
"Hope..." I paused and then added "Esperanza."
"Esperanza? Hope es Esperanza en español?"
"Si." I said.
"Oh, si Esperanza! Mucho gusto!"

I smiled and walked farther into the store. She had forgotten I had asked about kitchen items, but I didn't mind. The store only had four aisles so I found my way to the right section easily. As I walked, I translated the man's English sentences into Spanish, waiting to hear the final sentence to see if I had gotten it right. I grabbed a small metal cheese grater and a orange juicer and when I returned to the register, I added a "de la Rosa" candy.
"Gracias Anita." I said as she handed me my change and receipt.
Gracias Esperanza!" She smiled.
You are my sister.
You are my sister.
Tu eres mi hermana.