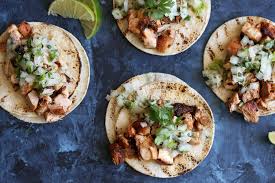 I wasn't going to be "human" much longer if I didn't listen to my growling stomach, so I asked a friend to join me at my favorite hole-in-the-wall Mexican taco shop downtown. This tiny family restaurant made each taco the way they were supposed to be made--two small layered corn tortillas covered with diced chicken, special green salsa, cilantro, and way too many onions. I could taste them already. We parked across the street from the restaurant and jumped out. The sun was setting behind the library as we walked toward dinner.
"Disculpe, Señorita?"
I turned my head. Next to me on the sidewalk was a woman so short I could see the top of her head. Her ash brown hair was pulled back into a ponytail and she was dressed in a plain white shirt and beige pants. She sounded like a small child.
"Yes?" I stopped walking.
"Do you know where is Lyons?"  She asked in broken English.
"Sure," I pointed directly ahead of me. "You're almost there. Just keep going and when you get to the end of this street, by the library, make a left. That's Lyons Avenue."
She looked where I pointed, but her face told me she wasn't quite sure. I took a few steps forward, pointed again toward Lyons and said, "You're almost there." She looked in the direction I pointed and nodded. I continued toward the restaurant, my head dizzy with hunger.
"Disculpe, uh, señorita um..." I heard her voice again and turned around.
"Tengo hambre." She said softly. She looked at me briefly and then stared at the ground. I hesitated. You're hungry? You probably just want money, I thought. There were quite a few people who begged on the street corners and in front of the liquor stores in this part of town. A few weeks ago, a homeless man told me he was hungry only to turn down my food offer and suggest I give him the cash instead. I decided to call her bluff.
"Quiere a venir con nosotros? Vamos a comer."  I told her we were about to eat and asked her if she'd like to join us. To my surprise, she agreed.
The three of us walked in silence a short block to the taco shop. There was a long line to order food as usual, and most of the tables were full and the ones that weren't, were dirty.  Left over radishes, Styrofoam plates, and half empty salsa cups needed to be cleared off tables. I didn't care. This place was the real deal--messy tables and all.
The three of us got in line and waited with the rest of the hungry guests. After a few minutes, we made it to the counter and placed our order in Spanish. My friend and I each ordered four "tacos de pollo" and our new dinner partner ordered a burrito. We all got different sodas. The cashier handed us our number and walked to one of the few open tables near the window.  I used a handful of napkins to wipe off the table before sitting down.
"Come se llama usted?" My friend asked of our dinner guest who was sliding into the booth seat across from us. I noticed her feet barely touched the ground underneath the table.
"Faustina."
"Mucho gusto Faustina." My friend and I said together. Faustina responded "Mucho gusto" and looked around the restaurant like a very small person in a giant's world.
"Vive aquí?" (Do you live here?) My friend asked.
"Sí," she replied. She told us she had been living in the San Fernando Valley with a friend who lost her place so she had taken the bus out to this area to live with a friend who had an apartment just down the road.
Our order number was called and I went to grab our food. It all fit on a green tray which I carried back to our table. Both my friend and Faustina were sitting in silence.
I passed out the plates.  "Where are you from originally?" My friend asked, continuing the conversation and trying to break up the awkward silence. I sat down.
"Bolivia," she replied.
"Bolivia?" I asked, my eyebrows raised in surprise. I was not expecting her to say Bolivia. She might as well have said Mars. She nodded. I used a radish to scrape a few onions off one of my tacos and wondered How far away is that? I didn't ask. I took a bite of the taco that now had just the right amount of onions and tried to picture South America in my head. Her eyes darted to me several times and I could tell she was uncomfortable. I wondered if my white skin told her I was judging her. My friend sensed the discomfort and began to share a little bit about her journey to America. She was originally from Mexico and had been brought here by family when she was very small. Faustina took a big bite of her burrito and nodded as my friend talked.

When my friend stopped talking to take a bite of her taco, I dabbed my mouth with a napkin and asked Faustina in Spanish what part of Bolivia she was from. Faustina swallowed hard and held her half-eaten burrito in front of her.
"La Paz." She replied softly.
"Oh, La Paz!" I said, "Es el capital, no?" She nodded yes while her eyes searched my face.

"Bienvenidos." I said with a smile. Her eyes softened and began to shine like dark, wet gemstones. A smile formed in the corners of her mouth.

"Why did you leave Bolivia?" my friend asked.
Faustina's smile disappeared as she answered in Spanish. "So much poverty," she shook her head. "Bolivia is so poor--one of the poorest countries in South America."  With that, she continued to eat. She was obviously very hungry and not shy about taking big bites. We all ate in silence, occasionally looking up at each other and exchanging awkward smiles. She appeared to be in her thirties but I wondered if maybe she was actually much younger. She had a plain, but friendly face--like the face of someone you would trust with your children, but something about it--the lines in her forehead and the creases in the corners of her eyes told me she had seen and experienced a lot.
My friend shared a little bit more about how she came to California from Mexico, talking about her father and the Bracero work program--the diplomatic agreement which allowed Mexican immigrants to come to America to work. Faustina did not elaborate on her journey, only saying that she came here all by herself. I tried to picture where Bolivia was on a map and how many countries she would have to pass through if she walked here or came by train. I wondered how long it took her to get here, if she had paid someone to guide her or if she had followed others. Recently, I had watched a special on CBS on the Darien Gap, the swampy, jungle pass between Columbia and Panama which thousands of migrants use each year to move through South and Central America on their way to Mexico and then on to the United States. Many never make it through this gap--succumbing to the roaring rivers, bitter cold, hungry tigers, or violent gangs. I wondered if she had passed through that area or if she had somehow found her way to America by way of the ocean, coming in through Florida. I thought about the courage it would take to come so far all alone and how bad--how desperate things must have been for her in Bolivia to take that kind of risk.
"That must have been scary," I said in Spanish.
"Si." Her voice was very soft. She looked down and took the last bite of her burrito as I finished my final taco. My friend nibbled on a radish, emptying her plate of everything but green specs of cilantro.
"Listas?" I asked if we were ready to go.
We stood up and emptied our trash carefully into the overflowing bin behind us. We pushed open the door and stepped out into the cool night. I was glad it was late September and the hot summer nights were over. I zipped up my jacket as a slight breeze brushed against me. That's when I noticed Faustina didn't have a jacket and was in a short-sleeved shirt. My friend noticed too, and immediately took off her sweater and held it out. Faustina seemed startled by the gesture at first, then slowly stuck her hands through the armholes. It fit perfectly, like it was made for her. She looked at my friend with a questioning look like she was wondering how she would give it back.
"Keep it," my friend said.
A smile took over Faustina's face. "Muchas gracias! "Dios la bendiga!" (God bless you.)
"My pleasure," my friend replied. "Mucho gusto. Dios la bendiga, tambien."
We both hugged Faustina and said goodbye as the breeze picked up and the street lights turned on. My friend and I stood and watched her walk toward Lyons Avenue one tiny step at a time, her narrow shoulders wrapped in a sweater, her hair pulled back into a small, tight ponytail that didn't move. When she disappeared around the corner, we turned around and the first thing I saw was the red wooden cross on the church across the street. My eyes filled up with tears as a verse from the Bible popped into my head: "Do not forget to show hospitality to strangers, for by doing so, some of you will have shown hospitality to angels without knowing it..." (Hebrews 13:2)


-H. Horner, copyright 2017.  Use, publish or print with permission of the author only. Contact author on gmail at hopeh1122.