I felt bad even thinking it.
There I was, sitting on a train looking at someone directly ahead of me and wondering:
Is he a terrorist?
Gosh, how silly.
But wait. What if he is?
He looks the part.
He's definitely from that part of the world. 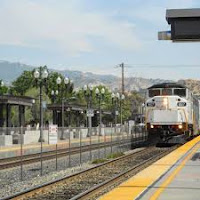 Dark curly hair, large dark eyes, dark skin, dark five o'clock shadow on his face. Dark. Dark. Dark.
He's the same age as most of the terrorists, too. Mid twenties. Old enough to have had time to be radicalized and young enough to be fearless. I probably should keep an eye on him.
Jeez, I'm an awful person. What is wrong with me? I shouldn't think that. He's probably a perfectly nice guy just headed downtown to shop like I am. He has a baby face. He's probably harmless and here I am profiling him. Poor guy, I bet he gets this all the time. I bet he can't go anywhere, or ride any kind of public transportation without getting looks. I wonder if anyone has ever reported him as suspicious? Can you imagine how horrifying that would be--getting shook down, probed, patted and questioned just because of how you look? I mean, he's probably just a student. Look, he has a backpack.
Wait, a backpack?!
Why does he have a backpack on the train? On a Saturday?
Oh God. He probably IS a terrorist. What should I do? He's just sitting there, facing me with a blank expression on his face trying to blend in with everyone else headed to L.A.'s Union Station on the Metrolink. Going downtown to do some shopping are you? Or do you plan to kick this weekend off with a bang?
Oh stop it, Hope. You're being ridiculous. And racist.
No, you're not. You're just being vigilant. Remember "See something- Say something?"  You need to get over the need to be "PC" and keep an eye on this guy.
But the saying is "See Something, Say Something" Hope, not: "See SOMEONE, say something."  And he's not doing anything, except sitting there. And for goodness sake, you have a backpack too, remember? Just calm down and look out the window.
Through the glass to my left is the San Fernando Valley, a huge metropolis just on the outside of L.A. hemmed in by mountains. The train is currently racing along the back side of a run-down valley neighborhood full of stray bottles, walls covered in graffiti and houses pieced together with tarps, sheets of metal, and stray bricks. Every window I see has a blanket hanging in it as a curtain. Motorhomes are parked in backyards, their tires flat and their windows blocked with aluminum foil and cardboard. I can't see a single blade of grass anywhere. It's depressing. I check back on the suspicious man in front of me.

He is still staring straight ahead. His eyes catch mine and I look away quickly, back outside.
Below me now is a junkyard full of sand piles, wood, railroad ties, concrete blocks, and large yellow earth movers. Anything that has been sitting too long is tagged in large, spray-painted bubble letters.
Risky

Ghost
Baller
Life = Misery is tagged on a large chunk of concrete near an intersection where cars are backed up waiting for us to pass. Even the obviously new paved walkway that runs along the back of the neighborhood near the tracks is littered with trash and graffiti. Large fancy engraved stone signs announce the beginning of this concrete "trail" but it really looks more like an alley. Cement benches double as art canvases for gangsters and I still have not seen one blade of grass--green grass that is.

The conductor announces that the next stop is Burbank. I know that after Burbank is Glendale and after Glendale is Union Station. I know all this because of a sweet elderly lady I met at the station where I first got on board. She told me in Spanish that she had been riding the train to Glendale every month for thirty years to get her hair done. She was dressed like she was heading to church--black sparkly turtleneck sweater, finely pressed beige dress pants, a Christmas scarf and a fancy leather purse which she clung to tightly. She told me to sit on the third level of the train.  "No hay mucha gente alli." There aren't a lot of people there. She was right. Just she and I, a homeless man, a young couple, and this guy--the dark haired man sitting a few rows up facing my direction who still had no expression on his face.

"Next stop Union Station!" The conductor yelled out. "This is the stop you have all been waiting for!" His enthusiasm made people chuckle. "Make sure you get off because this is the last stop and the train will be out of service." I waited for the train to roll to a gentle stop and then stood up. The man I had been watching stood up too, turned around and headed toward the stairs at the front of the car. I headed to the stairs at the back, going down one narrow step at a time, holding tightly to the guardrail. Quite a few passengers were waiting on the first level for the doors to open. People looked down, checked their phones, shuffled in place, hoisted backpacks on to their shoulders and tried not to invade anyone else's space with their eyes or body. I was here for a vinyl record show about five miles away and was anxious to get off. The doors opened and everyone surged forward to get out. I made it outside the train and followed a large throng of people down a concrete walk-way and into Union Station. I was amazed at two things: First, the large amount of people in the station on a Saturday (although it was nearing Christmas) and second, the fact that no one ever checked my ticket. For all anyone knew I didn't even have a ticket. I had one--a bar-code on my phone, but why hadn't anyone scanned it? Then I saw the signs warning about the $1,200 fine for anyone found riding the train without a ticket. I guess they use the honor system, I thought. Great. No one is watching us or checking tickets. In this day and age? It's a free-for-all for thugs, thieves, and terrorists. Why not have more security? Then I remembered to be careful what you wish for. It's expensive to have someone check tickets and view surveillance footage and walk around with a gun looking angry and as comforting as all that is, taxes are high enough in this damn state so I'll take the honor system and paranoia for free, please.

I made it into Union Station and marveled at how L.A. has its very own Grand Central Station. OK, not exactly but it still is something to see. High decorative ceilings, solid wood benches, brass fixtures, fancy cafes with candles, white linen napkins and wine glasses propped up to look inviting.  I just wanted to get to the record fair. I had never taken an Uber before, but I was ready.  I had downloaded the app, entered my credit card number, and now I just had to find my way out of the station. When in doubt about how to get out of a public place--follow the masses. I kept walking behind a crowd of people and before I knew it I was outside in the fresh air and bright Southern California sun. I squinted and looked around. There, right across the boulevard was Olvera Street--the historic Mexican marketplace made to look like Old Los Angeles with it's adobe architecture, murals, street vendors, and brick walkways. I'd been there many times and always enjoyed myself--as a child I remember purchasing confetti eggs from one of the vendors. These were decorated egg shells

that held confetti instead of yolk inside and gave parents an instant headache at the thought of the clean-up involved. That's probably why they always insisted children throw them at each other while still on Olvera Street. These messy souvenirs never made it home. 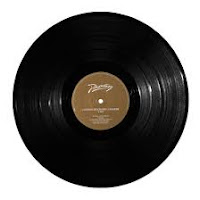 We shot through a signal light as it was turning yellow and he said to get ready because my destination was coming up on the left and he wasn't sure there would be anywhere to park. The area looked to be largely industrial and technically, we were now in downtown Huntington Park according to the map on my app. He did a u-turn in the middle of the street and pulled over to the curb in front of a large white wooden sign that said Records.
"Here you are," he said. "Have fun!"
"Thank you! Have a good one!"
"You, too, he said, "Merry Christmas."
What? Don't you mean Happy Holidays? I thought.
"Merry Christmas," I replied. I opened the door and hopped out on to the curb. I threw my backpack over my shoulder. It was light, ready to be filled with dusty 33's and 45's. It was all I had with me. Sort of. I was traveling with more baggage than I realized.