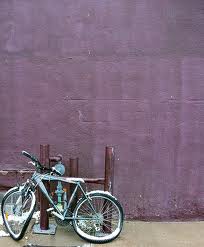 When a bicyclist runs into you at full speed--wow, that hurts.
I should know because it happened to me a few days ago.  It was 4:45 in the morning (Yes, 4:45 AM!  What can I say?  I am an early bird.) I was jogging on a narrow sidewalk across a bridge that runs over a dry riverbed.  Next thing I know, I look up and I have a bicyclist baring down on me at arm's length.  I twist quickly and literally shoulder and him right off his bike into the roadway.  He went flying.  His bike went flying. Once I stopped staggering forward, I turned to see him bounce and land face down in the middle of the road.  I had to drag him out of the roadway and on to the curb.  Then I had to go back into the road for his bike.  My fear was a car would come and swerve to miss the bike and then...? He lay on the curb moaning and gasping in pain for what seemed like an eternity.  I kept asking him if he was OK, did he want me to call an ambulance -  he did not answer my question. He just cried out in pain.  I felt nauseous and rubbed my sore shoulder wondering what I should do.
Once he could talk, (but still not stand) he said over and over again, "No, don't call an ambulance.  Please.  I am so, so, sorry.  I know it is my fault.  I saw you and I should have slowed down, but I thought I could get around you.  I am so sorry..."  He complained of severe back pain and said he was seeing stars.  I got him to his feet, but he remained hunched over like an old man with scoliosis.
I told him I accept his apology.  I didn't say much more than that.  I was in pain, startled, and completely high on adrenaline.  I was also full of all the "what ifs"....
What if he had hit me head on at that speed?  I could have been seriously injured or killed!
What if he had slammed into the railing?  He is not wearing a helmet!
What if he had flown on to the hood or windshield or under the tire of an oncoming car?
What if I had been jogging with my dog when this happened?

I helped him hobble up to a wider part of the sidewalk near a trail entrance. I wheeled his bike up there too, and with two bent tires and a thrashed frame, it moved along like the shopping cart I always seem to get at the 99 Cent Only Store.  You know the one that veers and pulls like a untamed colt?
I leaned it down on the ground next to him.  He was still in A LOT of pain.  All I could see was his face.  He was about 19 or 20, covered head to toe in black clothing including a black beanie. He kept apologizing, moaning.  He was still complaining about his back hurt saying he landed on the edge of the curb and that he was really, really sorry and he knew it was his fault.  He said I could go if I wanted to.
I told him, "Look I am not sticking around so I can call the cops or a lawyer.  I am sticking around because I am worried about you."
He paused, looked at me and then asked, "Are you OK?"
I said no, but I would be.
He seemed to calm down a bit at that point.  I think he thought I was going to be really mad or threaten him or chastise him or rant and rave, call a lawyer, call a cop, point at my shoulder than at him, try to talk some sense into him like an angry mom or an outraged citizen.  Not for one minute did I feel like doing that.  It was really strange.  And it is not because I am a saint or superhuman, it just didn't seem right.  I did tell him that this could have been a lot worse and yes, it was his fault.  I reminded him though that I accepted his apology.
He made a phone call to work and said he would not be in.  So that was where he was headed in such a hurry!  Me? I was just out for my usual morning jog.  Then he called a family member to come pick him up.  After he was done, we just stood there in silence nursing our wounds.  The sun wasn't even appearing on the horizon yet.  We just had the streetlight above us and the flashing lights of the passing cars.
I said "I think we almost did this yesterday."
He didn't look at me.  He kept his hand on his back and remained hunched over his bike.
"Were you the guy who blew by me yesterday going up hill?"
Yesterday, I had been jogging up a hill and a bicyclist had come up from behind and blown by me on my right, scaring the heck out of me.
He nodded and replied, "Lesson learned."
I didn't say anything at this point.
Lesson learned indeed. If this doesn't slow him down, nothing will.  Well, at least for a few weeks.  Until he gets his bike repaired.  Until he is able to walk normally again.  Until his back recuperates.  His mind forgets.  His muscles relax.  His emotions simmer down.
By then I will have a reflective jogging vest.  I ordered it that night on Amazon.  But I still will have to be on the lookout because...We never learn, do we?
Like this bicyclist, I have made some pretty reckless decisions over the years.  I have hurt others with those decisions and even bumped myself up quite a bit in the process.  Some of these stupid decisions I've made several times which means that well, like him, I never seem to learn.  I would blame it on being young, being brave, being entitled, being naive, being abused, just having a good time, or go to my usual scapegoats---blame it on something or someone in my childhood.
THE TRUTH IS I AM THE PROBLEM.  I am the downhill reckless biker in my life.  I am the crazy kid without a helmet dressed in all black riding in the darkness at break neck speed.  I am the one who sees the jogger, and takes a chance anyway.
I am the CHIEF of SINNERS.  (Sorry, Apostle Paul and John Bunyan, I know you both thought you held this title.)
I have known better and done it anyway.  Hail to the chief!
I have known better, done it, hurt others, and then done it again.  Double hail to the Chief!!
I have known better, done it, hurt others, hurt myself, blamed something or someone else, then done it again!  Triple hail to the Chief!!!
OK, I'll stop there. This is not about beating myself up.  This is about me getting real with myself and stating the truth.  The closer I get to God the better he looks and the worse I look.  I see a lot I don't like.  A lot I want God to work on.  A lot I need forgiveness for.
Luckily, I am all ready forgiven by someone who came into the world to save sinners just like me. I can be free of the burden of guilt and stop repeating the same mistakes over and over. I can stop blaming others and start "getting real" about my own shortcomings - not in a guilt ridden way, but in a way that says, "God slow me down before I hurt myself and someone else!"  Thank God he does. He saves, cleanses, renews and redirects me.  He drags me out of the roadway and puts me back on my bike.
Reckless Bicyclist's Prayer: God, help me to know when I  make a reckless decision that breaks your heart and help me to say "lesson learned" and change permanently through the strength you will provide to do so.  Help me to slow down!  Help me to stop blaming others.  Help me hit the brakes BEFORE I crash, flip, bounce and lay face down in the pain and shame of my reckless decision.  'Cause wow, that hurts.
Posted by Hope Horner at 6:28 PM