The Wildebeest Was Pushed! 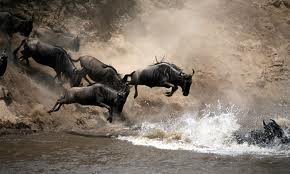 "Survival of fittest" is not what we think it is.
Today I heard a prominent biologist explain a scene from an episode of  "Mutual of Omaha's Wild Kingdom" to make this point.  If you grew up watching the show as I did, you may remember this moment:

Wildebeests approach a shallow river in the heart of the Serengeti.  On the other side is green grass; their food source.  To get to the grass, they must cross the river which is infested with crocodiles -- hungry, BIG crocs who are licking their lips at the site of the wildebeests piling up on the embankment like confused tourists.  The crocs slap their tails and writhe in anticipation.  The water churns.  The wildebeests hesitate.  Suddenly, "Grandpa,"  an old, feeble wildebeest, stumbles out from the pack and plunges into the river.  The crocs pounce in a feeding frenzy.  As they devour him, the rest of the wildebeests race across the river and make it safely to the other side.

Did you see that?  Wasn't that amazing?! That one old wildebeest, Grandpa, just sacrificed himself for the whole pack!  He knew he was the oldest, the frailest, the one whose time had come and so he threw himself into the chomping jaws of the predators to save his fellow wildebeests!  He made himself a sacrifice! He ensured the others - the healthy, the virile, the young would survive and the wild, proud wildebeest species could live on.
Ah, no.  As it turns out, that's more the Lifetime Television for Women version. (Sorry ladies.)
The biologist explains despite what "Wild Kingdom" narrator Marlin Perkins says about grandpa's heroism, this isn't what happened at all.  You missed something. You saw the story, but not the WHOLE story.

The Wildebeest was pushed!

First, I laughed out loud.  (I immediately thought "Just like Humpty Dumpty!") Then, I thought:
Really?  Grandpa was PUSHED into the river?  He didn't jump in to save the pack? What?
No!  It can't be! This story was so heart warming!  Couldn't we just leave it at that?  I mean I practically had my blog entry written at that point - you know "The Sacrificial Wildebeest"!  Does anyone want to guess what that blog entry would be about?!

Nope, sorry, no animal sacrifice here. Play back the video and you'll see.  Cue it up just a little bit earlier - to the part right before where the wildebeest appears to jump into the water.
What is that other Wildebeest doing?  Hey!  Wait a minute!  What are ALL those young, virile, wildebeests doing to Grandpa?  By Golly! (got to use a classic Grandpa expression here) They're pushing him forward toward the water!  They're pushing him IN!
Yup, with a kick here and a butt there, Grandpa gets jockeyed up to the front of the pack by the young'ins and then plop!--- into the water and waiting jaws of the crocs he goes.  No final goodbyes.  No dramatic speech.  No tears.  Just a nudge, a plop and a chomp.
Wow.
Kids these days.

The biologist clarified why "Wild Kingdom" got it wrong.  Until it was debunked in the 1960's, scientists used to believe that survival of the fittest meant that "animals behave for the good of the species."  The theory said animals' group behavior was directed in ways to increase the chances that the species would survive.  Instead, as the Grandpa video and years of scientific research showed, evolution is not about individual animals making sacrifices for the benefit of the species, it is about "individual selection."  What does that mean?
It means animals are instinctively, naturally selfish.  Their life depends on it. They look out for themselves and behave in ways to optimize their own chances of being able to replicate (reproduce) themselves.  It's not about survival of the fittest in the species sense, it's about survival of ME (fit or not) in the individual sense. Instead of "taking one for the team" for the good of the species like we all thought Grandpa was doing, when we look closer we see it was all about Junior making sure HE survived and every Junior in that pack behaving in the same way.  It's all about ME.  If I survive, I get to pass on more of MY DNA to the next generation.
I WILL SURVIVE!  I WILL BE TOP WILDEBEEST!  I WILL BE KING OF THE WORLD!

OK, NOW can you sense what this blog is going to be about? If not, I'll get right to the point:
I am a wildebeest.
So are you.
We don't have to believe in evolution to know that intrinsically, naturally, genetically WE ARE SELFISH.   I can tell you for sure that I am a Wildebeest.
Heck, even the media treats me like a Wildebeest.  The front page of this month's MONEY magazine exclaims, "Europe's Pain, Your Gain!" Television ads stroke my wildebeest ego, reminding me that it really is "All about me."  They tell me "this time is my time" so I should "get mine" "take time for me" "get what I deserve." (I hope that last one doesn't happen!)  Oh, and let's not forget, I am a glamorous, vain wildebeest (although I do have quite a few bad hair days) so I am continually needing to "cultivate my self" and "bring out the beauty that is me."  Yes, this 'beest is really a beauty!
Cue a gorgeous young woman with husky voice caressing a beauty product.
Hey you! Yeah you -Ms. Sexy! We designed this product with YOU in mind -- you beautiful, cool, discerning, professional, sophisticated...
Woman.
WILDEBEEST.
OK, sure every once in awhile I put down the mirror, dial down my ego and do something nice for someone else.  I'm not the only one. There is a lot of charity in the world, a lot of kindness, a lot of benevolence.  I am not a nasty wildebeest.  I am nice.  Caring. Thoughtful.  Loving.  And for goodness sake, I would never, ever...EVER push Grandpa into the river!
But unfortunately, history would argue with me.  I don't need to go far back in time to see just how ugly it can get.  A lot of people have gone into the river over the years, some in groups, some one at a time.  I want what I want and you don't fit into that paradigm, or you get in the way so PLOP! - into the river you go!  I may not have personally thrown anyone or any group into the river, but I have certainly pushed and nudged people closer to the river's edge.  I've put ME first at the expense of others.  And I have to look back and wonder -- how many times have I stood by and watched others go into the river and either pretended not to notice or used it as an opportunity to get myself to greener pastures?

So, my Wildebeest brothers and sisters, I acknowledge my selfishness.  That's one thing I can do that those African grass eaters can't.  I can also contemplate.  Confess.  Change. And I can consider Christ -- a humble, sacrificial, loving servant as my example for living.  God knows this scraggly, faithless, selfish beest needs a Savior to help it cross the river.