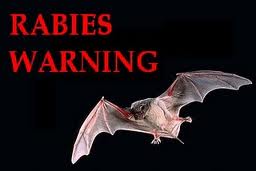 Rabid bats are showing up in record numbers around Los Angeles County.  According to my local paper, this year, 38 rabid bats had been "discovered."  The article spent significant time warning people not to touch the bats.
IF YOU SEE A RABID BAT, DEAD OR ALIVE, DO NOT TOUCH IT!  YOU COULD GET RABIES!
Wow, I'm so glad they warned me.  If I run across one of those furry little monsters laying in a ditch, beady eyes rolled back in its tiny head, frothy white foam still hanging from its tiny bat lips -- well, heavens to Betsy, for a second there, it'll be all I can do not to CUDDLE it.  But I'll know better now.
Something is wrong when we need to be warned not to pet the rabid bats.
Reminds me of another story I saw on the news lately...
A woman is walking her small dog on a nature preserve early in the morning when a coyote sneaks up and snatches her dog for breakfast.   I am a dog lover and found this HORRIFYING to say the least.  I felt so bad for that poor pooch and for the distraught dog walker.  Can you imagine?  Ugh.  Makes me sick to just think about it since I occasionally run with my dog early in the morning and have had a few coyotes get too close for comfort. But then, just as I was feeling really bad for this poor lady, she says to the newscaster covering the story:
"I was just devastated.  My dog is gone.  I see signs all over this city warning about coyotes, but there was no sign here on the preserve. Nothing warned me about them.  I had no idea."
What?!
Let me translate her comment as I heard it:  "It is the fault of the city/county/whatever agency is in charge that my dog got snatched up by a hungry coyote because YOU DIDN'T POST ANY SIGNS WARNING ME!!"
Really?
I screamed back at the news, "Lady!  You were walking your dog on a NATURE PRESERVE!!  Coyotes were just ONE of SEVERAL ANIMALS that were probably drooling over your dog that morning.  Should the city/county/agency in charge make a warning sign listing ALL the animals that could possibly devour your pooch?  WARNING:  Coyotes, hawks, snakes, lions and tigers and bears (oh my!) live here and may eat your dog. For goodness sake, when you swim in the ocean, do you expect signs warning you about sharks, jellyfish, stingrays...?!" (She probably does.)

So, this is probably what the bat warning in the newspaper was all about -- Better warn the locals or you know what could happen...
Some decent little boy is out for a walk in some decent little town and runs across a dead, frothy bat and pokes it with a stick and then touches it with his finger and then rubs it's fuzzy little belly and then tries to put a gummy worm inside it's mouth and then SUDDENLY the bat will spring to life (Ha! I was only faking it!) and bite him square on the nose and then he'll run home screaming to mommy who will rush him in the Mercedes SUV to Urgent Care where he will whimper and whine while being pumped full of antibiotics, jell-o and anti-venom (I don't know! What DO they give you when a bat bites your nose?) and then while he's recovering, mommy will call her attorney to sue the city/county/agency in charge for not posting warning signs, or atleast, for goodness sake, she'll sputter angrily -Couldn't someone have posted an article in the local paper that warns everyone about all the rabid bats just lying around in wait for little curious, innocent boys who just want to share a gummy worm?!?
Maybe I am just being cynical (A shocking consideration I know), but we are in a sad place when we need to be officially warned not to touch disgusting animals and to watch out for wildlife when we walk in a place that preserves wildlife.
And I am in that place a lot.
Spiritually, I mean. I need the obvious stated.  Often.
Read the Bible and it is full of people like me.  People who have to be warned not to touch (Ark of the Covenant: Exodus 25), not to look (Lot's wife: Genesis 19), not to keep doing whatever it is they are doing that angers God. (That's what all those prophets were for in the Old Testament.)
In the New Testament, Christ warns one of his disciples: Peter you WILL deny me three times before the dawn.
No, I won't Lord.
Peter, I'm warning you.  You WILL deny me.
Never!
You will.
And sure enough, despite the warning, Peter DOES.  Three times he says "I don't know this Jesus you accuse me of knowing!" and right on cue, the rooster crows to announce the dawn.
There is some comfort in knowing that I am not the only one who seems a bit thick headed and doesn't always heed warnings.  I have to be told not to pet bats and to watch out for coyotes on nature preserves. And just like in the coyote incident -I'm so ready to blame someone else for my problems, so unwilling to admit - yeah, I should have known that.  It's called personal responsibility and in the spiritual sense it is goes even deeper than personal.  It's interpersonal-- my failure to heed God's warnings affects my relationship with God and with others. I might get away with it for awhile, but sooner or later, the rooster is going to crow and I'll know Jesus was right.  I need to listen to him.  I need to submit to his will.  I need to recognize that he warns because he loves.  And when I don't heed, I need to take responsibility for my mistakes, not blame others or make excuses, but instead confess and come back into fellowship with him.  His forgiveness covers even my most thick-headed mistakes - you know the ones -- the spiritual equivalent of petting a rabid bat or being surprised to find a wildlife on a wildlife preserve.

25 Verses about Stubbornness:
http://www.bukisa.com/articles/289358_25-bible-verses-about-stubbornness
2 Corinthians 5:18-21 - Reconciliation despite our mistakes!