You Gotta Have Faith (An Atheist & Christian Agree!) 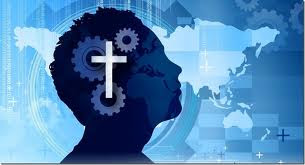 I finally heard an Atheist and a Christian agree on something.
Actually, on more than one something.
First, they agreed that they both need FAITH.
The Atheist said he has faith because he can't prove everything. (There are mathematical equations, for example, that can't be proved, but we know are true through experience.)  He also said that even though he didn't believe in a Creator, the universe still needs a starting point and well, that takes faith.  Whether you believe God or gasses started it all, you gotta have FAITH.  Why?
Because neither can be proven.  Some things exist outside the bounds of science and reason.  These things require faith.
Well, good, that settles it.
Nope, actually it doesn't. There are still a lot of Atheists and Christians batting this age-old topic, and each other, around.
But for a few moments, it was really nice to hear them agree on something.
But wait, there's more!
The other "something" the Christian and the Atheist agreed on is that  suffering is not always explainable.  Pain is just flat out a real crappy part of life on this planet.  Both of these gentleman were pediatric oncologists (children's cancer doctors) so they had seen a lot of suffering both by sick young patients and devastated parents.  Is there anything worse than a child dying?  Any greater suffering?  Any bigger reason to doubt that God exists?  Why must we suffer? Why? Why? Why?!  Where is God in all this?
Both the Christian and the Atheist doctor agreed that there is no way to wrap your head around why there is so much pain and suffering in the world. They both agreed that there aren't and shouldn't be any pat answers. The Atheist can't explain suffering fully by chalking it all up to science, synapses misfiring or out of control cells or simple cause and effect.  The Christian can't explain it all by saying God's ways are not our ways, or pointing to original sin or by regurgitating some other jaded church axiom.  In fact, they both agreed that when a parent loses a child to cancer and looks up at them with big, red, tear filled eyes that beg "Why?" the best answer is: "I'm so very, very sorry."
Period.
I found their agreement on these topics inspiring.  How nice to see them drop the dogma and just say look, it all boils down to FAITH and we just can't know everything. That doesn't mean God isn't real but it also doesn't mean that evolution gets it all wrong either.  So let's stop insisting we KNOW.  Christians please stop beating your chests and pounding your fists and screaming about how right you are! If you don't believe you came from apes, than stop acting like one!  And Atheists?  Stop acting like you can prove everything and you're soooo much smarter than people who believe in God.  It takes just as much brain power to explore theology as it does biology. And both require FAITH so we have at least one thing we can agree on, right?

What it boils down to for me is this: I put my faith in Creator God not Creative Gasses.  I want a Nurturer, not just Nature.  I believe in the un-created Creator; the One who does not need to be created - The Un-Started Starting Point - but I am not saying I  can prove it.  I am just saying I believe it.  And you know what? Now that I think about it, the very fact that I can believe - that I can have faith - is astounding to me.  I mean, what is belief anyway? And faith? Just chemical reactions in my brain?
The Atheist gave a few reasons why humans have faith or specifically, why they seek out God.  He believed we naturally have a "God-sized hole in our heart that needs to be filled" because it was essential for our survival as a species to bond with others and form trust based groups (i.e. religious groups). So essentially (and probably too simply put) it is in our DNA to find reasons to connect with others.  He also said that human beings artificially constructed God (the divine filler of this vacancy in our hearts) to create the "someone is watching us" mentality which ensures that people will well-behaved even when no one else is watching.  This ensured our survival.  If "the man upstairs" is watching then we better think twice before we steal our neighbor's sheep or sleep with his wife.  People are better behaved if they run a little paranoid.  Less destruction and devastation ensues.  Species live longer.
Sure, this is plausible.  But so void of all the passion and love and joy that goes along with finding out that God does fill that hole in my heart just perfectly.  That he was meant to be there and WANTS to be there. And then, once he is in that spot, he changes my life so completely that I WANT to do what is right not because I feel his steely eyes bearing down on me from afar, but because I love him.  Which makes me wonder... I know what my brain looks like on drugs thanks to Nancy Reagan (Remember the frying pan and the egg in the 1980's?) but I have no idea what my brain looks like on God.  That's OK.
I just know that I have a brain,created or evolved, that wants God, needs God, feels God and loves God.
And yes, it takes faith to believe that God has always been here, is here with me now, and someday I will see him face to face.
That reminds me.  The Atheist and the Christian agreed on one more thing. (See there is so much to agree on!) They talked about the end of life.  Even though the Atheist didn't believe that God would be there at the end, he said that he never tries to change his patients minds by telling them no one is waiting.  He said that would be heartless. He said he knows it is heartless to say that "not because I believe in God, but because I am a human being and I can empathize."  He said religion, in general, is good.  (Except when used for violence/oppression.) I thought it was weird to hear an Atheist say religion was good.  He explained. When your child dies, you want to believe that their suffering is over.  That you will see them again.  That they are being delivered into God's hands and not just put into the earth. You need hope.
So once again the atheist and the Christian can agree.
We all need hope.
And of course I agree with that!