Faith Without Exercise is Dead! 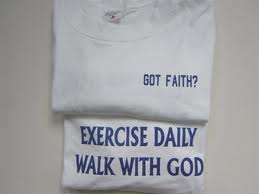 I believe in God. I really do!
I have faith.
I say it loudly. Earnestly.
The Apostle Paul is not impressed.
"Good for you! You believe! Yipee! You have faith!" He throws up his arms sarcastically and then leans in toward me.  His voice is just above a whisper: "You believe in God, huh Hope?  Well, so does the devil!"
I know, I know.  Belief isn't enough.  Faith without works is dead. Got it.
I've heard the "faith without works" verse from the book of James a million times. (James 2:17)  Not as much since I became a Lutheran (The book of James is not a Lutheran favorite.  Luther called it the "epistle of straw."), but still it pops up almost every time someone mentions faith and works in the same sentence.
There is another small book in the New Testament that has a lot to say about faith and works:
2nd Peter.
Turns out Peter has a lot to say about what a LIVING FAITH is supposed to look, feel and sound like. He describes faith as something I "exercise" in order to "develop" certain characteristics.  Here is Peter, straight from the Amplified Bible:

Wow, that is a lot of exercising! I'm out of breath just READING it all.  I can tell I am totally out of shape spiritually.  My faith is under-developed.  I feel like I am still in the warm-up stage, you know, the KNOWLEDGE part near the beginning?  Once in awhile I might put in a wind-sprint or two of self-control, but it doesn't last long. It's a lot of work.  Sometimes I even flex a little bit of my brotherly (or sisterly) affection, but I do tire quickly of all that neighborly lovey-dovey stuff, especially with those folks who are so hard to LIKE, let alone love.  It is SO much easier to just stay on the couch and let my faith relax.  Chill out. Veg.
These verses are a challenge to my spiritual laziness. One of the things I noticed about the exercise list above is how they all build on each other.  Exercising my faith starts a chain reaction.  Like a muscle moving, each exercise is independent, but works along with others.  They all work together and the ultimate result, the culmination, is CHRIST-LIKE LOVE.  That is really where all this faith exercise leads.  Physical exercise perfects the body.  Exercising my faith perfects my love - my love of God and of others.  It doesn't save me.  It doesn't make me better than anyone else.  It doesn't get me into heaven ahead of anyone else. (Just because there is exercise involved doesn't mean this is a race!)  Jesus already did all the work involved in saving me.  And like I said earlier, I believe it.  And Saint Paul is right -- the devil believes it, too.  Difference is, he doesn't exercise his faith. He exercises his power to wreak havoc. Stir up doubt. Kick-up fear. Encourage laziness.  He spends time trying to weigh me down with guilt, selfishness, pride and other vices to make my faith exercises nearly impossible.  Like sand bags, he loads them up on my shoulders.  This makes me just want to sink into the couch and sulk.  To blame.  To give up.  To complain.  The last thing I want to do is get up and exercise.  Forget that!  These sand bags are so heavy.  They're not really there of course, I just believe/feel they are.  I need God to remove them.  I've tried to remove them on my own and they are pretty hard to cast off.
Sometimes when I'm exercising my faith, you know, jogging around the track of life, exercising my SELF-CONTROL, heading toward STEADFASTNESS...all of a sudden-- AAACCCK!!  My foot catches on something in the road and I go flying face first on to the pavement.  What the heck was that?  I look back.  What?!?! Who put my SARCASM out in the middle of the road?  I thought I had moved that out of the roadway?  Ugh.  Guess I didn't move it far enough.  Actually, maybe that is the problem - I moved it out of the way instead of giving it to God so he can CAST it away.  I can't do it on my own.  I have tried dragging these temptations, vices and negative traits out of the roadway and they just keep getting dragged back out into the road ahead of me to trip me up again.  I need God's help to see them, avoid them, remove them and eventually defeat them (and to defeat the one who keeps putting them out in front of me.)
I am currently reading a book of spiritual short stories.  The introduction is by Peter J. Gomes, former professor and Chaplain at Harvard University. (He died this past year. RIP!)  He explains how America is the place people run to for freedom. He explains freedom in two ways - freedom FROM and freedom FOR.  People have come to this country seeking freedom FROM religious oppression (among other things) and freedom FOR the right/ability to express their freedom in new, unique ways.
When I read this, I was immediately struck with how this relates to my spiritual life and the whole faith vs. works debate that ensues when that verse in James is quoted.  What Jesus did on the cross gives me freedom FROM death/punishment/separation from God and also gives me freedom FOR living the life God created me to live.  I am free from the chains that bound me and therefore free to love as Christ did.  Doesn't mean my "works" will always match the "good work that He has begun in me" (Philippians 1:6), but it does mean that my works don't give me freedom, they are the expression OF my freedom!  So..I exercise my faith not to build myself up or earn a place in heaven, but because I have been created and empowered by God to love Him and others in a world-changing, peace-making, God-empowered way that shows the world...I AM FREE! COME EXERCISE YOUR FAITH WITH ME!  WE'RE FREE!