I want to change the world,
But I don't know what to do,
So I'll leave it up to you.

From the Song "Change the World" by 10 Years After 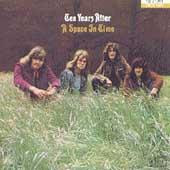 Change the world.
The thought is daunting.  I am just one person.  There are so many people...so many problems...  So many places to go and people to help.  The world is so big and so messed up and it is all so overwhelming.  Maybe I'll just leave it up to someone else.  Like the Mormons.  Or the missionaries.  Or Mothers Against Drunk Driving.  Or the monks.  Or the military?  Or the medical experts.
My job?
Get out of the way. Write a nice song with a catchy chorus that shows I am at least thinking about it.  Sit cross-legged in a field of poppies.  Smoke weed. Drink hard liquor. Lean back.  Tune out. Try not to worry about it.  Maybe pray a little prayer for peace, if I can get to it before I pass out.
Change the world?
Impossible.
A wonderful idea, but an idealistic one.  An unrealistic one.  You gotta smoke a lot of something harder than pot to believe you can change the world my friend!  You're going to need a whole lot of flower power for this one!  Best to just pass the buck.  Toke and pass.  Toke and pass.

I know a middle-aged man who works in my community on his own dime and time, helping families in need.    This past December he focused on a family who was living in a small, one-bedroom ranch house infested with bed bugs.  The house had a leaky roof, windows that didn't close completely, sheets for curtains and no heat.  The parents slept on a bed in the living room--Open the front door and instead of a flat screen and a coffee table, you walked right into a bed, scattered boxes, and an old floppy couch.  And a dog.  A young pit bull would lick your hands clean and try to do the same to your face.  The two young boys slept in the one bedroom in the house, on the floor wrapped up in blankets and well, bugs.The fridge had bottled water, Tampico, milk and not much else.  Where are we?  Bolivia?  Mexico? Haiti?  Nope, My Town, California, USA.  The man I am describing had just started to work with a local health agency to address the family's bed bug issue, because the owner, who knew about the problem, had been unresponsive.  Just a little over a week ago, the owner didn't remove the bugs, but he did remove the family because he wanted to sell the home (and probably to pass the bed bug buck.) Luckily, the family found another place, and are in the process of moving last I heard.  Meanwhile, my friend is securing a bunk bed from Target for the boys so when they get to their new place, they won't have to sleep on the floor.  He has also reached out to  find help to ensure that the bed bugs don't come along with the family to the new place.  This is what I know he has done, I am sure there is much more I am not aware of.
Is he changing the world?
Yes, he is.
Wait a minute! You mean, he is changing the big, bad ball of blue and brown that floats in our galaxy?  He's tackled that giant world and made a difference?
No and yes.
He is changing a little world right where he can reach it.
The next time the boys go to sleep they will not itch and scratch.  That will be a whole new world for them.  Their bodies will rest on a mattress, not on top of a thin blanket on a hard floor, and their heads will be on a pillow instead of the crumpled up sweatshirt.  New world.  My guess is Dad and Mom will sleep better too in this new world, knowing that their boys are more comfortable, safe and healthy.  There will probably be an extra Tampico or two in the fridge and some cheese, fruit and meat. If  the roof leaks, large tarps held down with bricks will be placed on the roof to cover the holes.  Sure, the roof will be plastic and blue for awhile in this new world, but it will be dry inside until a local roofer who can do the work for free or next to nothing comes along because he too, believes that he can change the world, this little world, one kind deed at a time.

Pass the buck.
It's easy to do -
Avoid the blisters, black and blues
Of charity work, just give a dollar or two
And take the responsibility off of you
To help the poor, the lonely and strange.
You're free to live as you arrange -
Believing the world too big to change.
It's hard work this caring and such,
So much easier to just
Pass the buck.
-H.Horner

God help me not to pass the buck. My money helps, but it is not enough. Make my world smaller so that I can see the need around me and DO something about it instead of just praying and worrying and wishing for world peace.  May I bring peace and love to every little world I find.  You've got the whole world in your hands.