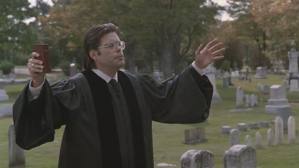 If you've ever seen a Stephen King movie you know that somewhere in the movie, King is going to show up.  He'll be some inconsequential character--a minister at a funeral, a janitor at a school, but he will show up in his own movie, speaking the words he wrote, playing a bit part in a scene he created.  Alfred Hitchcock used to do it, too. It's rare, but sometimes the artist enters his work.  The creator enters the world he created.
Sound familiar?
"Yeah, Yeah, I know. Baby Jesus. Mary, Joseph. Bethlehem."
But wait a minute. Think about that manger moment --
The God who created the womb, enters one.
The God who created the world is born into it.
The Master Architect of all that is, puts down his pencil and enters his drawing.
The Expert Watchmaker sets his watch to the time he created and controls.
The Master Creator gets his feet dirty in the dust from which he created man.
It's like Shakespeare going into battle with Hamlet.
Michelangelo painting himself into "The Last Supper."
Rodgers & Hammerstein singing "Do Re Mi" with Sister Maria in the Sound of Music.
Only WAY more amazing.
Because Jesus plays no "bit part." He's not an extra.  He is not a stagnant oily image on a canvas.  He is not a character in a play who shows up in some miscellaneous scene.  He is GOD.  And God doesn't come into the world as Jesus to sing and dance. He comes as God on a mission of reconciliation.  He lives, teaches, serves and ultimately sacrifices his life and rises again so all of creation can come into harmony with its Creator. Seeing Stephen King in one of his movies is fun.  Seeing Jesus as Emmanuel (God With Us) is astounding.
OK, so the Creator comes into his Creation.  But who created the Creator? Who Created God?
This was asked at a debate I was listening to lately and the answer was simple:
No one.
God is not created.  He is the un-created Creator. He just is.  He was, He is, He will be.  We can't see him through a telescope, put him on a chronological timeline or in a test-tube.  He created the telescope, timeline and test-tube, just like the play right, artist or movie maker creates plays, paintings or films.  If Stephen King hadn't made it a habit to write himself into his own movies, we would never look for him there.  We wouldn't expect to find him in a scene interacting with one of his characters.  We would watch (or read) Carrie and Kujo and Pet Cemetery and never find him and we'd be OK with that because we know the artist doesn't have to appear in his work. Most artists don't.  They are certainly reflected in their work--experiences, attitudes and creativity are expressed there, but they can't always be found there.
I can certainly see God reflected in the world - in nature, music, loving relationships and the like, but I am not going to fly into outer space like the first Russian astronaut did and come back with this report:  "Well, I was out there, I looked around and I didn't see God."

That's like peering into a tent and wondering why the tent maker isn't inside.
God can't be found in outer space or anywhere else.  According to astronaut Colonel Jeff Williams who spent six months at the Space Station - God can be seen, but not found in outer space. There is evidence for him there in the motion, beauty, order and complexity of our galaxy, but you aren't go to look out of the window of the Space Shuttle and see God and the Man in the Moon having Cappuccino.
The best look we have at God is when we look at the life of Jesus. It's been 2013 years since then--when God went "Stephen King" and entered his work. He'll be back.  There's a sequel in the works.