I received a card recently from my Dad who wrote these words inside: "Your spiritual life has a reality to it."  I took it as a compliment because I think I know what he meant. Before you think I am getting a big head, let me explain.
I he meant that I don't try to pretend to be some great Christian with my head in the clouds. I don't put "Never drive faster than you guardian angel can fly" bumper stickers on my car. (Has that won "Worst Bumper Sticker of the Year" yet?! I mean, for goodness sake, just floor it and you'll leave Gabriel in the dust!) I don't go around telling people to "Trust God" after they've lost their house in a fire or their baby boy.
I don't quote Bible verses in public, watch Christian TV or wear a cross around my neck. (Except for the pewter Celtic one that was brought back for me from Ireland by a dear friend.) When it comes right down to it - I'm just down to earth about my faith. For me, it's really all about Jesus. And I don't mean that in a charismatic-Jesus-freak creepy Christian talk kind of way. I just mean, the man who was God on earth - Jesus. Who was/is he? Why did he come to earth?  Did he really rise from the dead? The rest of it--all the rules, the preachers, the service styles--they're all details I don't want to fuss over. They might feel real and important, but they're not what my faith is REALLY all about. They are a temporary, manufactured reality that we humans have made about the eternal reality--Christ.

I am listening to an online course at Stanford University about the legacy of Charles Darwin to coincide with a book I am reading called Monkey Girl. ( Get It on Amazon Here ) I'll be honest, between the course and the book, Creationism is starting to feel like a bunch of bunk. The earth created in 6 days? Hmm. A naked couple lives in a garden with a snake and a forbidden tree? Yeah right! Two of EVERY kind of animal on the ark? No way! I can't get my three dogs to get along for 24 hours! And I'll be brutally honest again (I'm on a roll!) - I don't even understand evolution! I know virtually nothing about it other than what I have learned lately. Growing up, I never learned anything about evolution. I was home-schooled and went to private Christian schools (Don't hold it against me!) so I never learned about evolution, natural selection, survival of the fittest...none of it.  According to Bill Nye the Science Guy this is why I never chose a career in the field of science and also why I don't vote. Obviously, he knows neither about my high school Bunsen burner incident (sorry Mrs. Dunlap) or my voting track record (perfect). (To read more about this topic, check out a past blog entry of mine: Trashcan Fire on the 405! )
Reading the book and listening to the online course helps me understand evolution, but it also helps me understand why I never learned about evolution. The Christian circles described in the book are the same ones I grew up in - the ones who thought of Darwin as the anti-Christ. According to them, he turned us all into humanists, naturalists, atheists and has ruined public school education (with help from the teacher's union of course.) I don't believe this, but that is what a lot of people said in the 60's and 70's when the battle over what could be taught in school was raging. I wasn't around in the 60's (It's a shame because I  missed seeing so many great rock bands live) and too young in the 70's (glad I missed disco) to really remember much about the debate between evolution and creationism, but I do remember learning nothing about evolution except that it was stupid. Oh, and then along came "Intelligent Design"--a kind of a sneaky compromise by Christians to get some mention of "The Designer Upstairs Who Shall Remain Nameless" into the science curriculum.  I know none of the science books I lugged home from school everyday had any mention of evolution. I remember it being mocked in school and church, but that's about it.
"YOU might have come from a monkey, but I didn't!"
"The reason why you need billions of years for evolution to happen is because if it happened in a few thousand years no one would believe it!"
"Sure, pigeons can change colors over time but they don't become dogs!"
"The picture of a lizard jumping off a cliff year after year, now that's a good one! Jump. Splat! Jump. Splat! Then all of a sudden---it sprouts wings and Jump...Fly!  Ridiculous." 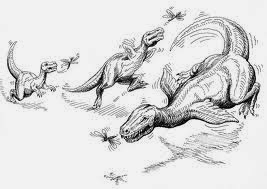 And honestly, it did sound ridiculous at the time. I mean, how would I know? To me "natural selection" meant choosing the least dry piece of pizza in the cafeteria. Turns out it means every man for himself. Do everything you can to survive so you can procreate and pass on your genes. (I wrote a little bit about this too in a past blog if you care to naturally select this link: The Wildebeest Was Pushed! )

At work, we have a phrase:  "Talk straight."  In other words, say it like it is.  Talk in realities. Be straightforward. I guess that is what I try to do spiritually and why this person said my spiritual life has a reality to it. This is what I try to do in this blog--speak straight about spiritual stuff, some of which I wish would have gone extinct with the dinosaurs. So with that in mind, let me "talk straight" about my spiritual reality...
My spiritual reality is this: When it comes to religion, my reality waivers.
What denomination is most in line with my faith? Baptist? Lutheran? Methodist? None? How did it happen exactly--the beginning of earth? Did the Garden of Eden really exist? Did the flood actually happen?  And what about the rituals of the church? Baptism? Communion? Confession? All necessary? How should they be done? What style of worship service do I prefer? Are female pastors OK?  Do gay people go to heaven? Is everyone going to heaven? What about the miracles in the Bible - are they real? Can you take the Bible literally? Should you? The religious wavering and wondering goes on and on...You can read my past blog entries from a few years ago and see there was a time when I was trying to figure it all out. I still have times where I like to "wrestle" with my Guardian Angel (when she's not flying next to my Nissan mouthing the words SLOW DOWN), but not like I used to. I left behind the "matter of fact" faith arguing awhile back. It's exhausting and counter-productive to argue over religion. It makes me tired and scares the neighbors. So while my religious reality waivers...
When it comes to Jesus, it doesn't. 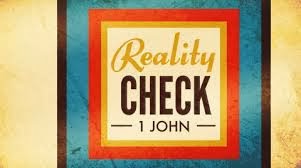 He lived. He came. He served. He died. He lives again.
I don't understand it all. Some days I don't know why he even bothered, other than I know it comes from a heart so full of love that he burst out of his comfort zone to be with us and to make it possible for us to be with him. I might not know exactly how I got here or why I walk upright and birds fly, but I know WHO is walking with me and who cares when a sparrow falls (Matthew 10). I know he wants me to love others, EVERYONE, not just the ones who fit into my reality. And it's not like he asked me to do that without first doing it himself.

So "Love like Christ" is my spiritual reality. Just get up, be loving like Christ, and stop freaking out over the religious details. It's hard enough just to be loving some days, isn't it? I don't live this spiritual reality every day, but I'm trying..trying and failing and getting up and trying again, sounds like reality, doesn't it?  Or maybe that lizard who eventually learned to fly?
So yeah, I guess my spiritual life DOES have a reality to it.
Thanks for the compliment, Dad.