Comfortable in the Castle 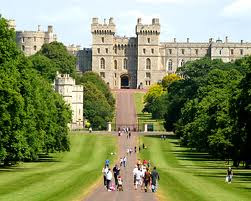 I love the quiet.  My solitude. The time alone to think.  To read. To ponder.  To write.  I love to sip my Pepsi Max while I look out my window on the world.  Ahhhhh...It's so comfortable in the castle.
Ah, yes, and it is so easy to look down on others from the castle, too.
I mean, look at all those people out there?  Look at those good for nothing, sinful, people doing whatever they want, stuffing themselves full of all the best things money can buy!  Why in the world do you need that much tinting on your Mercedes?  It's only a C class!  Why must you be so loud all the time?  Why don't you get a job?  Why don't you get a life?  Why don't you go back to where you came from?!  You're ruining our country.  Draining our resources.  Taking our jobs.  Oops, hold on a minute there, it looks like I need a little more Pepsi Max.

Occasionally, I get out of the castle on Monday afternoons to sit in a room with ten teenage girls.  It's a support group I run with a co-worker of mine.  We help the girls work through their issues, bring in guest speakers and do special projects to encourage their personal growth.  One session from awhile back stands out.  We were discussing the girls plans for the future, what they would like to do when they graduate --their dreams, hopes, aspirations.  Several girls expressed an interest in going to college.  A few wanted to be lawyers and doctors, a few teachers.  None wanted to be pregnant, addicted, gang affiliated and broke. This was the point of the program - to help them be succesful and to help them work through the issues that may keep them from success.  I think it is worth mentioning that I was the only white girl in the room. Every single other girl in the group that day, including my co-worker, was Latino.  She was Nicaraguan and the teens were all Mexican.
All of a sudden in the middle of our group session, as one girl was sharing her dreams of becoming a veterinarian, another girl across the room started crying.  Her head dropped and she sniffed loudly.  Her name was Martha and she was one of the quieter girls in the group.
I asked her if she was OK.  She nodded, but looked away.  Big, fat tears sprung from her eyes.
"Martha, what is it?"  I asked in a soft voice.
"Nothing.  It's just that I am so FRUSTRATED!"  Her voice raised to a yell at this point and startled everyone in the group including me.  She kept going, "I am so freakin' FRUSTRATED and MAD AND I DON'T KNOW, JUST PISSED OFF YOU KNOW?"
"Why are you so upset Marthat?"  I wanted to know.  She had all of our attention.  Her outburst was totally out of place.
"BECAUSE I CAN'T FRICKIN GET A JOB!  I CAN'T FRICKIN GO TO COLLEGE AND YOU, YOU ROSA!" She pointed at the girl in our group who wanted to be a veterinarian, "YOU DON'T KNOW WHAT IT IS LIKE BECAUSE YOU ARE HERE LEGALLY!  I AM SO JEALOUS OF YOU! I HATE IT!  DO YOU KNOW WHAT IT IS LIKE TO LIVE EVERYDAY IN FEAR?  DO YOU KNOW?!"  She choked up at this point and then began to sob.  To my surprise another girl jumped in.
"YEAH, YOU CAN'T EVEN GO TO SCHOOL WITHOUT LOOKING OVER YOUR SHOULDER!  I HATE IT!  MY UNCLE WAS TAKEN LAST MONTH AND HE WAS LIKE A FATHER TO ME!"  Now, she began to sob loudly.  This was a girl's group, so crying was something I was used to, but this was different.  This was SORROW.  This was weeping.  This wasn't just sadness.  This was HOPELESSNESS. For the next twenty minutes the girls in my group vented about their fears.  About half were here in America legally and about half were not.  The half that were not, were all brought here when they were very young.  A few were brought as babies.  They told of little brothers being drugged with cough syrup or some mysetery pill to keep them quiet as they passed through border patrol.  They talked about staying with strange people in hotel rooms until they could connect with a coyote on the Mexican side of the border (someone who would bring them over for a price) and then staying with strangers or distant relatives on the American side until they could connect with family somewhere in the states.  Some didn't even remember their journey because they were the ones drugged with the cough syrup, asleep at Mom's breast, or just two young to remember.
Their stories, they sorrow, BROKE MY HEART AND CHANGED ME FOREVER.  In fact, it made me write a book featuring a few of the immigration stories of the girls in my group.  They willingly and freely told me about their experience of being brought to this country.  They told me about their fears.  They told me about how hopeless they felt and how it wasn't "fair" since when they were brought here they were so small, so young, so powerless.  All they had ever known was America. Several said they would have no where to go, no on to go to, if they were sent back to Mexico.  They said they loved America and had dreams for themselves.  I watched their faces change from excitement to dejection as what they wanted to do crashed up against the rocks of reality everytime they remembered that they weren't here legally.
Good grades in high school?  Graduate with honors?  Why bother.
College? University? Trade school? What was the point.
Good job? Career?  Dream on sister! Better hope you are good with the Windex and Pledge.
Who is that following you?  INS?  Police officer?  Nope, just a man in a business suit, but just to be sure, you should probably turn the corner here.  Actually, go back to your house, and find your mattress in the living room and lie down.  Maybe this will all be over someday.  Until it is, maybe you can escape this pain, this feeling of worthlessness now, with a little alcohol, a little weed, an older boyfriend, a group of tatooed, trouble making friends.

That day, the group discussion ended with Martha asking question after question through her tears and sobs.  Why should I go to college?  Why bother?  What good would it do for me to have an advanced degree if the best I can hope for is selling tamales or buttered corn on the street corner?  Why should her brother to pay to go to auto repair trade school if the best job he can get would be to join his Dad as a gardner?  I didn't have answers to her questions.  But she wasn't looking for answers, she was looking for light at the end of the tunnel.  I simply told her that she should just continue to do what is right, to stay on the right path, to stay out of trouble and in school and hopefully someday, this will all change.  (And thank God, it looks like that has happened.)  What else could I tell her?  Well, I did tell her that I wanted to tell her story.  That it should be heard.  That people should know how she, and other girls in the group feel.  So I wrote the book.  I wrote it for people like me who live in a castle.  One with a view.  A real high, comfortable, myopic, detached view.

I wrote this blog entry from inside the castle this morning, where it is nice and cool. My chair is padded and comfortable as I lean over my laptop.  I slept well last night in bed.  I had a nice big bowl of Grapenuts this morning.  They were very crunchy, hard to chew, but much easier to swallow than that lump that was in my throat that day when Martha spoke.