The Sound of Music

Like most everyone, I have seen The Sound of Music on TV many times. 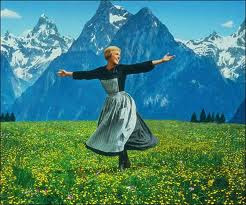 "The hills are alive with the sound of music. I know I will hear what I heard before! My heart wants to sing..."
Just TRY not to get that song stuck in your head all day!  If that doesn't work, then these two words will definitely get fans of this play in a 24 hour song loop: LONELY GOATHERD.

The whole opening scene (the one pictured to the left) just enraptures me.  The singing, the spinning, the peaceful smile on Maria's face, the lush green hillsides, the mustard colored flowers, and towering snow-capped mountains.
I really hope that the soundtrack of this wonderful Rogers and Hammerstein masterpiece is playing when I arrive in heaven.  And if heaven looks like Austria in early summer, that would be fine by me.

Last night, I saw the play live and had an epiphany. After all these years, I finally figured out why it is entitled "The Sound of Music."  I never understood that title before.  Why in the world was this musical called THE SOUND OF MUSIC?  I thought maybe it could have been called, "The Problem of Maria" or "The Von Trapp Family Singers" or "Edelweiss" after the beautiful, white Austrian flower that the family sings about near the end of the movie.  But The Sound of Music?  What does that even mean?  Music is a SOUND, I know that, but how does that even fit with this play?  I think I finally just decided that because the movie had so many memorable, wonderful songs the creators just decided to name it what it would be known for - MUSIC.
But last night, as I sat in my seat with program in hand, I figured it all out...
Before Maria, a nun, arrives at the Von Trapp family castle to take over the care of the seven children living there, it is a quiet place.  There are breathtaking views, luxurious furniture, fancy dinners with plenty of guests, but it is a sterile, stern and reserved place. The father of the children, a widower, is a Navy Captain and he runs his family like he runs a ship.  TIGHT. He blows a whistle to signal them to come.  He makes them march.  They stand in a straight line for roll call in drab, perfectly clean, pressed uniforms. Oh, and there is absolutely, positively, NO SINGING by anyone at anytime in the castle.  However, when Maria shows up with her guitar and Do Re Mi in her heart, suddenly, it's not just the hills that come alive with music; it's the castle, the home, the children, and finally the very heart of CaptainVon Trapp.
It is the SOUND OF MUSIC that changes everything.
Let's back it up even a little earlier in the story.  At the abby where Maria comes from, singing is not allowed without permission from the head Mother.  Nuns are only to sing certain songs at certain times.  Of course, Maria, can't keep a good song down.  She sings, whistles and carries a tune with her wherever she goes around the abby.  A few of the more pious and stuffy nuns don't like it, but most find both Maria and her singing amusing and delightful, as heard in the greatest nun anthem of all time "How Do You Solve a Problem Like Maria?"
Once again, THE SOUND OF MUSIC is what brings places and people to life.

And I thought, there is something about this title that relates to my FAITH.

Isn't RELIGION a lot like the Von Trapp castle before Maria?  Isn't it a lot like an abby minus a rebel singing nun?
Religion, as we traditionally think of it in the churchy, negative sense, is the dry, sterile, rule-focused, orderly, mainly MIND-FULL, law abiding way of approaching God. It is about getting in line.  It is about the way I look, doing what I'm told, following the rules.  It deadens the heart, crushes the spirit and seeks to control the mind.  Needless to say, it is not on the list of A FEW OF MY FAVORITE THINGS!
But this lifeless, sterile, inert religion comes alive just like those hills when it becomes what it is meant to be -  life giving!  When it is filled with LOVE that translates into helping the poor, the widows and the orphans then it comes alive. (See James 1:27)  Like a song I can't keep down, it fills my heart and my life and stirs the hearts and lives of those around me! It isn't all MIND; it is HEART.  It isn't all MANNERS; it is SERVICE. It isn't all ANSWERS and pious hand folding; IT is ACTION and getting hands dirty.  Rules and regulations suck the life out of me, mute me, burden me, obligate me and guilt-trip me, but the freedom song of knowing I am alive in Christ, I am His and He is mine enraptures me, energizes me and empowers me.  I am reminded of a line from the love song between Maria and Captain Von Trapp:
"And here you are standing there loving me, whether or not you should..."  Maybe those are Jesus' words to me?  And nope, Jesus, there wasn't anything I did in my childhood or since then to deserve your love, but yet, YOU LOVE ME.   Wheeeeeeeeeeeeeeeeeeeeeeeeeeeeeeeeee!
That's a song I can't help but sing!
Yes, THE SOUND OF MUSIC changes everything.
So sing loud!