I just finished the book Amazing Grace: A Vocabulary of Faith by Kathleen Norris. This book was a "Notable Book of the Year" and I found it to be an engaging read. Ms. Norris goes through words that we use in the faith community regularly--God, preaching, belief, incarnation, etc., and turns these words around slowly so you can seem them from several sides, like a crystal, reflecting on what these words mean to the Christian church, to history, to well known Saints, people of other faiths, and to her. Sometimes she and the church don't agree on what the word means, sometimes they do. Sometimes you'll agree with her, sometimes you won't.  Most of the time, you'll find yourself saying, "I never thought about it like that." And that is her point.  I recommend reading a chapter or two a day, but you can just breeze right through it because it is an easy read. Either way, you'll find she shines a unique light on familiar faith terms. 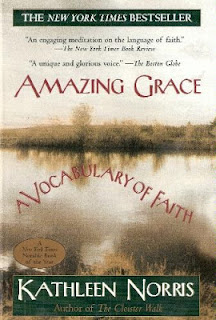 Here are some excerpts for your reading pleasure:

INHERITANCE - A reporter asked the Dali Lama what he would say to Americans who want to become Buddhists: "Don't bother. Learn from Buddhism if that is good for you, but do it as a Christian, Jew, whatever. And be a good friend to us."

COMMANDMENTS - Christians have been remarkably adept and remarkably inventive at interpreting God's commandments to cover just about anything they don't approve of. The effect, of course, is to make the surpassingly large God of the Scriptures into the petty Cosmic Patrolman. Addictions are not petty, but for Christians, fretting over them as exclusively moral issues can be a convenient way of ignoring Jesus' admonition that it isn't what we ingest into our bodies that is at the root of our troubles, but what comes out of hearts and minds.

GOD - "One finds God because one is already found by God.  Anything we would find on our own would not be God." - Catherine M. LaCugna
Thomas Aquinas said that God was active, always in motion--an ocean of being, the sun lighting up the atmosphere, not noun, but verb. The God-Who-Is.

CHOSEN - In the suspicious atmosphere of the contemporary Christian church, it is good to know one's ground.  When others label me and try to exclude me, as too conservative or too liberal, as too feminist of not feminist enough, as too intellectual or not intellectually rigorous, as too Catholic to be a Presbyterian or too Presbyterian to be Catholic, I refuse to be shaken from the fold. It's my God, too, my Bible, my church, my faith, it chose me. But it does not make me "chosen" in a way that would exclude others. I hope it makes me eager to recognize the good, and the holy, wherever I encounter it.

CHRIST - I began to realize  that one of the most difficult things about believing in Christ is to resist the temptation to dis-incarnate him, to not accept him as fully human and fully divine. "When emphasis is placed on the divine at the expense of the human (the conservative error), Jesus becomes an ethereal authority figure who is remote from earthly life and experiences. When he is thought of as merely human (the liberal error) he becomes nothing more that a superior social worker or a popular guru." - From Gregory Wolfe

SINNER-WRETCH-REPROBATE - I am a sinner and the Presbyterian church offers me a weekly chance to come clean, and to pray along with others, what is termed the prayer of confession.  But pastors can be so reluctant to use the word "sin" that in church we end up confessing nothing except our highly developed capacity for denial. One week, for example, our confession began: "Our communication with you Jesus tends to be too infrequent to experience the transformation in our lives you want us to have" which seems less a prayer than a memo from one professional to another. At such times I picture God as a wily writing teacher who leans across the table and says, not at all gently, "Could you possibly be troubled to say what you mean?"  It would be refreshing to answer, simply, "I have sinned."

PREACHING - Quoting the 13th Century poet Mechtild of Magdeburg: "Of the heavenly things God has shown me, I can speak but a little word, not more than a honeybee can carry away on its foot from an overflowing jar."  In a sermon, I must allow the listeners into a story rather than tell them how to feel about my feelings, or God forbid, my ideas.

CHRISTIAN - From a bumper sticker - "He died to take away your sins, not your mind."
If there is any difference between the self-righteousness of the narrow-minded Christians who believe that being saved by Christ manes that they are morally superior to everyone else, the New Age types who consider themselves more spiritually evolved than the common folk or the devout free-thinkers who take pride in being beyond any need for God, I haven't been able to detect it.

CONVERSION - In the process of conversion, the detestable parts of our selves do not vanish so much as become our vanity, our sharp tongues, our talents for self-aggrandizement, self-delusion, or despair. But we can convert, in its root meaning turn around, so that we are forced to face ourselves as we really are. WE can pray that God will take our faults and use them for the good.

HELL - It may be permissible to identify another's behavior as foolish, particularly if it also forces me to reflect on my own foolishness. But to say, "You Fool," is to negate God's presence in a creature God has made. It is to invite God's absence, which is my definition of hell.

ASCETISM - Asceticism reminds us that our time, and our bodies, are not truly our own.

And near the end of the book, in the chapter called HEAVEN, she leaves us with the words of Saint Augustine:

Let us sing alleluia here on earth, while we still live in anxiety, so that we may sing one day in full security...we shall have no enemies in heaven, we shall never lose a friend. God's praises are sung both there and here, but here they are sung in anxiety, there in security, here they are sung by those destined to die, there, by hope's fulfillment, here they are sung by wayfarers, there, by those living in their own country.  So then...let us sing now, not in order to enjoy a life of leisure, but in order to lighten our labors.  You should sing as the wayfarers do--sing, but continue your journey...Sing then, but keep going. 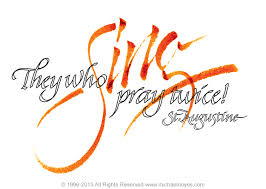