It Happens to the Best of Us

I am exactly the same age as the Egg McMuffin. 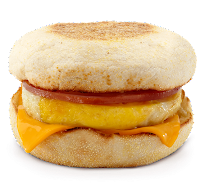 I discovered this skimming a Reader's Digest.
I just realized that both of the above statements mean I am old even though I wasn't reading RD with a magnifying glass under a Florida sun lamp and the Egg McMuffin is a 1970's McDevelopment. That keeps me out of my 80's, but I'm still old. Oh well. It happens to the best of us.

Yesterday morning, while I was jogging, I thought, "I wonder how long I am going to be able to do this?" Then deep in thought, I tripped over a rock jutting out from the dirt and nearly stumbled headlong through a paseo fence.
"Not long if you don't pay attention to where you are running, stupid."  (Yes, I do talk to myself. Another sure sign of aging.)
Then yesterday afternoon I caught a few innings of the NCAA women's softball championship. These girls move like I used to. All swagger and slugger, perfect "non-girly" throwing arms and even some spitting and black tar under their nails. I sighed as I watched. I miss the good ol' days. If I spit or have something black under my nails these days, it is because I have been out in my backyard trying to yank monstrous killer weeds out from under the roses and accidentally swallowed a lady bug.

I used to be really competitive.Well, I guess I still am, now I just find myself standing on the sidelines yelling competitive things like, "Rip their hearts out!" or "You gonna take that?!?" while young employees or employees wearing head to toe ligament braces shoot hoops. While they work up a sweat, I massage my knees and fan away people who ask me to play. I blew out my meniscus about a year ago, never had surgery, just took copious amounts of Motrin and stayed off it.  Now whenever I think about joining the basketball, softball or competitive crochet league at work, my meniscus rises up from under my kneecap and screams:
"What the heck are you thinking?!  Don't you know how easily I can take you out!? What do you think you are 20!?" 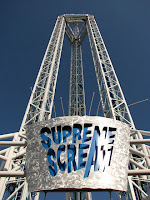 I also find myself afraid of things I never used to be afraid of.  Like roller coasters. I used to be a camp counselor from hell dragging crying, annoyingly sheltered, over-parented teens on every ride at Magic Mountain whether they wanted to go or not. I was the one who would yell, "Let's go again!" as soon as the coaster pulled into the station at the end of the ride and then jump off, realize I still had my seat belt on, sit back down, unbuckle, then jump up again and race down the ramp, pushing past pregnant moms who shouldn't have been on the ride anyway while my group of sixth graders were still sobbing into the sleeve of their Ralph Lauren polos hoping that the nice employee in the khaki pants and the Tweety Bird name tag would unbuckle their seat belts and save them from another round of the Riddler's Revenge.
Now, I stare up at the metal loops and downward death spirals and think, "Will I live to see another day?"  I'm 41, not 91, so I get on, but the whole time I being whipped around, jangled and dropped, I am thinking, "This is NOT how I want to die! Not even close! God no! Let me die the way I want to - withering away in some rest home all alone!  Please!"
One time my younger brother and I went on the "Supreme Scream" ride at Knott's Berry Farm. The ride is basically a sadistic parachute drop. You go up and up and up in this open cart until you can see your house, and then they drop you. Suddenly. Without warning. Straight down. You fall, but your stomach stays in the clouds. That's not the worst part though. The worst is the five second wait at the top. My brother had enough time to say one thing while we sat up there awaiting punishment from the zit-faced teen poised over the drop button miles below.
"Wow, this is really high!" His laugh was nervous, but eager.
I hated him in that moment. I was gripping the lap bar with one hand and crunching a fist-full of his sweatshirt with the other. My fist wanted to move north to his chin. I wanted to curse him out for all the things he did to me when we were growing up--reading my diary, tattle tailing, losing my baseball cards, but all that came out was:
"Shut up! Shut up!  I'm too old for this s---
And then I was on the ground looking up wondering if my stomach was coming down in the next cart. The zitty kid was smiling like a hyena.  A young hyena.

Another way I know I am getting old is I am starting to care less and less what people think.  I am less concerned with the latest fashion or a perfect hair day. Of course, I have never been on the cutting edge of fashion, unless you think Eddie Bauer is fashion. And my hairstyle is virtually the same as it was in high school only without the Sun-In highlights. My Mom told me the other day that I have always been very independent--"not easily influenced by others" so maybe I have never really cared what people think to begin with, but at least now I have some sort of age justification for being a snob. I can freely and openly embrace the approaching days of white Keds and loud floral prints.

Yesterday, I really showed my age. I hugged a volunteer who I barely knew who came to my office with a bunch of store-bought pastries to say thanks. (Why are you thanking me? YOU are the one who deserves the thanks!) I gave him a big hug right in front of everyone in the office. Maybe a handshake would have been more appropriate? A follow up call from the office secretary? A thank you on company letterhead---
Ms. Horner would like to thank you for your generous donation of baked goods which were eaten with the utmost pleasure by all of the staff in the office. We look forward to our continued pastry partnership.
Nope, I bear hugged him and he hugged me back, after he got over being startled. At first, he might of thought I was trying to dive headlong into the Albertson's bag full of doughy goodness, but no, I was really just trying to say thank you. One of my co-workers who saw us hugging giggled nervously. She was probably worried she was going to end up a witness in some future sexual harassment case.
I didn't care. I hugged him and thanked him. He smiled, turned pink, and then we chatted for awhile longer and he walked out.
After he left, someone in my office told me his story.
"His wife and children were all wiped out in a car accident several years ago."
I went silent for a few seconds.  I felt the hair on my arms start to stand up. "All of them?" I asked.
"All of them. Gone." She went on. "He was in the service, working overseas and gets the news. Comes home to no one."
Wow.
At that moment, I was so glad I had been too old to care what anyone thinks. I was glad I gave him a hug. Right there in the middle of my office. So sue me.

Besides hugging in the workplace, there are some other benefits to getting older--like AARP, senior discounts and 4pm dinners which I am looking forward to. One benefit I feel I am already starting to enjoy is feeling more and more assured as each day goes by, that this world can NOT be all there is. There is just no way that it all ends when we take our last breath. There is just too much about life and living that points to something more. I believe the Bible when it says that someday "we will mount up with wings like eagles" (Isaiah 40:31) and I look forward to that day because it means I won't trip headlong over rocks, my meniscus will be muted and I might actually enjoy a scary amusement park ride with my brother.
If I ever forgive him.