To My Reckless Parents

Dear Dad and Mom,
I am just going to get right to the point with this letter:
You were flat out reckless. You really were.
On my way home from work today, I saw parents walking their kids to the pool and I realized that when I was young, you didn't go with me to the pool. I mean, how could you let me at only eleven years old, walk two blocks all by myself, cross a busy four lane street to the community pool to swim with only the lifeguards watching? Shouldn't you have been hovering over me with sunblock like loving parents should? I didn't even have a cell phone!  How was I supposed to get a hold of you if I something bad happened?! What if I wanted you to come pick me up because I was tired?  Oh, that's right.  I had to walk there AND back. No, not uphill in the snow, but still, I was alone and I had to carry my own towel. 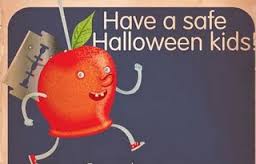 Oh, and that's not all I remember. How could you let me actually EAT my Halloween candy? You didn't even take it to the hospital to have it x-rayed first! We lived during the time when razor blades were showing up in apples for goodness sake! Tylenol was being poisoned! Guess I really dodged a bullet when I just popped those mini-Snickers into my mouth right out of the pillowcase. I still don't even know why you let us celebrate that holiday anyway. Many of the other Baptists at our church tried to warn you about celebrating that "worldly" holiday.  Thank God I went to a conservative Christian college where they cleansed me of my past devilish tendencies (well, some of them at least) and reminded me that the only real "Hallowed Eve" is Christmas Eve.
Halloween wasn't the only celebration where you showed what wild parents you were. Remember the birthday parties you used to throw for me and my brother and sister and the neighborhood kids? Why in the world would you let us bob for apples? We were literally drinking other kids' spit! No wonder we got the flu, the chicken pox, tonsillitis and the like. If that wasn't bad enough, you also let us have pillow fights at these parties. No, let me rephrase that--you dragged over a rickety wooden picnic bench, told two of us to stand on either end of it and then handed us pillows and shouted "Go!" Do you realize you were encouraging us to fight?! One time, I caught my sister's chin with my knuckle and gave her a bruise! It's a wonder she ever got over being punched in the face by her older sister. AND it's a wonder I didn't turn out to be some violent criminal with all the aggression you allowed me to show, even at my own birthday party. Thankfully, I turned out to be a law abiding citizen, but there were years where my brother and I used to put on our yellow snow mittens and go into the garage and box like Sugar Ray and Muhammad Ali. We were teenagers then, and just horsing around, but my point is, we were continuing the violence, and doing it all UNDER YOUR WATCH.

Was I a bad kid? Is that it? Is that why you were so careless about supervising me? Did you want me to learn lessons the hard way?
What could explain why you would let me play for HOURS far, far away from home at dangerous places like parks, shopping centers and creeks? Maybe you didn't know that my brother, sister and I used to actually TOUCH the frogs in the creeks. We lifted big, green islands of slimy algae looking for tadpoles. And we used to PICK UP crawdads.With our bare hands! We could have died from ecoli or salmonella or some other strange amphibious scum disease. Man, Mom and Dad, didn't you love me?

If so, then why did you let me ride my Huffy bike all by myself around our neighborhood like a crazed BMX wanna-be? Did you know I used to jump it off of that hill at the end of the street? Yeah, the one near that busy parking lot by the toxic gas station? Oh, and not just my bike! You let me ride the go-cart we bought at a neighbor's garage sale off that same hill until one time, I rolled it over and ruined my Vans and blue jeans. My helmet was undamaged because...
I WASN'T WEARING ONE!! (By the way Mom, I need to let you know all these years later that it was DAD who helped us hook the lawnmower motor up to the go-cart. I know with the statute of limitations he is probably going to get off scott free, but you might want to talk to him about this. Obviously, he showed total disregard for our safety.)
I am sorry to pile all of this on you now, but as I said, it occurred to me on the way home from work today watching those kids who's parents were practically draped on them, just how incredibly free-wheeling and wild my childhood was. I am shocked at how much freedom I had! I mean, my childhood excursions would make modern helicopter parents sputter and crash. I should really give you the benefit of the doubt, though.  Maybe you didn't take enough parenting classes, or watch enough Oprah, and I know that Dr. Phil wasn't around back in those days, so how could you know that letting me eat Lemonheads and Jawbreakers would make me hyper and disrespectful? I am sure all that sugar had a long term effect on my development. That, and all the butter and Jif peanut butter you fed us with all the trans fat and preservatives. Did we have to have both butter AND peanut butter on our Thomas English muffins in the morning? And then for dinner, you served those vegetables that came in those terrible, chemical leaching cans.  And if that wasn't enough of a nutrition nightmare, we had ice-cream for dessert like almost every night. Tin Roof Sundae. Rocky Road. Pecan Praline. How could you pump me full of processed sugar and simple carbs?  Lunch was no better---you served sandwiches that had bologna AND mayonnaise (YIKES!) and then you would let me swim in my neighbor's pool with my friends without waiting a half hour for the food to digest! It's an absolute miracle that I did not get a cramp and drown. Now that I think about it, I could have drowned even without the cramp, because we ran on the pool deck when it was wet, we used the slide that was later re-called by the manufacturer, and we had contests to see who could hold their breath the longest underwater and all the while, YOU WEREN'T THERE! You were probably working, grading papers, shopping for groceries, or doing laundry instead of doting on us and providing for our every wish. Wow. I am really lucky to be alive despite your recklessness.
BUT...I want you to know -- I forgive you.
I forgive you for letting me play tackle football with boys despite the risk of injury and intentional feely fouls.

I forgive you for letting me slide down our sloped driveway in a plastic trashcan lid and occasionally crashing into our metal fence. And then doing it again. And again. And AGAIN. Because it was fun.
I forgive you for letting me ride the neighbor kid's ATC in his backyard because this was before the warning that came out in the 90's about how these motorized bikes can roll over and cause injuries. (I could have told you that in the 80's, but it's OK.)
I am going to also try to forgive and forget that you let me ride a skateboard without a helmet, let me build a tree fort without a permit, that you didn't make me use hand sanitizer before I ate orange slices at halftime, and how at my first soccer game when I told you I felt "sick" you told me to "Get out there and play the game!" Even though you were not thinking of my feelings and needs, I know your heart was in the right place. You wanted me to be the best I could be, even if it meant that I had to think of others once in awhile and stop being a wuss.
Just know that I realize now that you were very, very reckless and while I am not going to report you to the Department of Children and Family Services at this point since I am over 40 and have learned to adapt, I am going to report you to whatever group happens to handle the nominations for "Best Parents Ever" and make sure you are, at the very least, a finalist.
With love and appreciation to my reckless parents for a wonderful childhood,
Hope

-Hope A. Horner, 2013
www.hopehorner.com
Twitter @HopeNote
Posted by Hope Horner at 6:30 AM