If you are a writer and you need something to write about - go to Facebook.  Peruse the site for awhile.  "Like" some local businesses.  Spy on friends. Enlarge pictures. You'll get plenty of writing fodder.  Look what I found today: 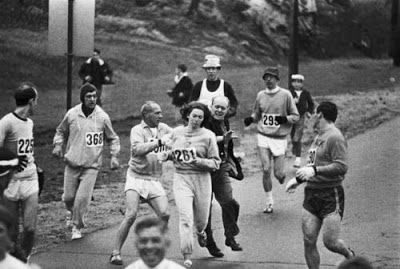 Awesome Moments in History
In 1967, Kathrine Switzer was the first woman to enter the Boston marathon. After realizing that a woman was running, race organizer Jock Semple went after Switzer shouting, “Get the hell out of my race and give me those numbers.” However, Switzer’s boyfriend and other male runners provided a protective shield during the entire marathon.The photographs taken of the incident made world headlines, and Kathrine later won the NYC marathon with a time of 3:07:29.

There were many comments on Facebook about this post:
"You go girl!"
"I'll add her to my heroine list!"
"Make a sandwich boys!"
Here's what I wanted to post (but ultimately didn't):
You sure you don't mean 1867?
Read the post again and note the date when this happened. Is it just me, or do you find it very hard to believe that this happened at the Boston Marathon only 50 years ago?! We had national news coverage about a woman running in a race having to be protected by men so she could finish only five decades ago??
Seriously, you sure this wasn't the 1800's?
Nope.
It was just 50 years ago folks.
And it reminds me of a few things:
We have come a long way in a short amount of time.
The world that I live in is not the world my parents lived in.
The world my parents lived in is not the world their parents lived in.

My mom used to tell me a lot of stories when she was a kid. She was a nurse before she was a teacher, so for awhile most her stories were about the various medical conditions and patients she encountered during her shift at the hospital. One story she told, had nothing to do with missing limbs or a deadly high fever, but it was memorable none the less.
"When I was in high school and we played basketball we had to pass the ball after dribbling it three times and we couldn't shoot unless we were in the key."
My jaw hit the kitchen floor when she said this. We were washing dishes. I put down my sponge.
"Are you serious?"
"Yup," she continued, "and we couldn't wear shorts."
"So wait a minute." I said. "You mean you would be dribbling down the court and once you got to your third dribble you would have to pass?" I was baffled at how this could possibly work. I was playing high school basketball at the time, in shorts, and only passed if I could no longer dribble because of a sideline or a defender. And I had shot more than once from outside the key. Most of my shots missed, but evidently I was a radical feminist.

"Yup.  That's how it worked."
I don't remember how our dish-washing conversation turned to sports or why she told me this, but I'll never forget that story nor my bafflement at how "old-school" that was.  Until that moment, I had no idea that when my Mom was growing up women weren't playing basketball the way I was. Did my Mom grow up in the Middle Ages? Nope, the 1950's. These were the rules and my Mom played by the rules.  She didn't try to dribble four times or wear shorts. (The latter could be a blessing in disguise as MY gym shorts were made of polyester and very "chaffing.") Mom played the game the way women were supposed to. She bounce-bounce-bounce-PASSED. She waited for the key to be under her feet before she dared take a shot.To do otherwise would have made her a1950's feminist. Or at least a failing P.E. student with a referral to detention. Maybe she went to a super conservative private high school?  Nope, public. Maybe this was Alabama? Pennyslvania.
So, sometimes, when people of this generation say things to me like "women should never lead in the church" or that "feminism is destroying the world" or that "women just aren't as good at math as men are," I have to remember that they grew up in the 1800's, the 1950's. I can take what they say with a grain of salt because they grew up in a world where there was no WNBA and if there had been, the women would have played in skirts and black people would have sat in a different section from the whites and used separate drinking fountains. And I have to remember that even a decade later, in the 1960's when my parents were in their twenties, a woman named Kathrine Switzer ran the Boston marathon and needed her boyfriend to protect her from an angry race coordinator. (She probably needed the police to protect her after she went on to win the NYC marathon.)
And all this happened just fifty years ago.
So when I pick up a basketball and bounce, bounce, bounce...
BOUNCE.
I am clearly a feminist.
Most of the time, I am a traveling feminist.  Hey, softball was more my thing. 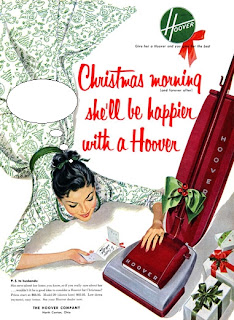